Bellator president Scott Coker has revealed who Fedor Emelianenko could fight next.

‘The Last Emperor’ has been out of action since his knockout victory over Tim Johnson in October 2021. The bout moved Emelianenko to a two-fight winning streak, as he had previously finished Quinton ‘Rampage’ Jackson in Japan in December 2019.

Prior to the bout with the UFC veteran, the Russian made it clear he only had two fights left in him. Since his win over Johnson, Emelianenko has sat on the sidelines, but not out of his own volition. Bellator previously planned for him to return this summer, to host a fight in his home country.

Sadly, those plans blew up, and Fedor Emelianenko has been unable to arrange his retirement fight. Now, Bellator president Scott Coker has given some fans some insight into what might take place next in a press conference. He previously stated that a showdown with Anderson Silva in Japan was on the table.

However, that’s not what the former PRIDE champion would like. According to Coker, Emelianenko has been insistent on his final fight being against heavyweight titleholder Ryan Bader.

‘Darth’ knocked out the legend in the Bellator heavyweight Grand Prix final in 2019 to win gold. If Emelianenko gets his way, he will get the chance to avenge the loss in his final outing. 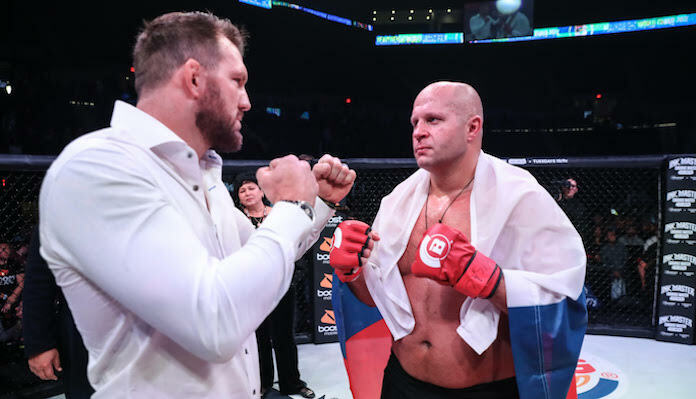 “We were talking about this earlier, and we had a fight set in July of this year in Red Square to have Fedor fight in his final fight,” Coker stated. “You talk about the greatest fighter of all time, the greatest heavyweight of all time, and when we planned this event that was supposed to be the event where he retires, he finally comes home, because Fedor went all over the world and conquered everybody.” (h/t MMAJunkie)

He continued “Comes home, has a grand parade, lots of pageantry, lots of just great production, great show, and he retires in front of his hometown. But obviously, with the invasion of Ukraine, that didn’t work out. So, that fight went out, and we’re still debating when we’re gonna fight him, but he wants to fight right away.”

“He wants to fight Ryan Bader. That’s what it comes down to,” Coker concluded. “He wants a revenge fight, and he wants to have the title shot. So, we haven’t really gotten too much into that, but that’s what his requests have been in the last three or four texts that I received, so let’s see how that goes.”

Do you want to see Fedor Emelianenko fight Ryan Bader? Sound off in the comment section below!

This article appeared first on BJPENN.COM
Previous articleTito Ortiz predicts former foe Anderson Silva will easily defeat Jake Paul: “he thinks him being 47 is going to make a difference?”
Next articleA.J. McKee down for trilogy fight with Patricio Pitbull after “horrible” title defense at Bellator 286: “There ain’t no respect for that dude”
© Newspaper WordPress Theme by TagDiv