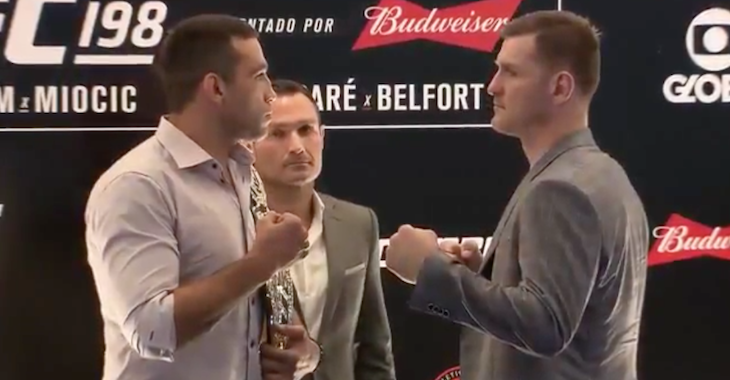 Current UFC heavyweight champion Fabricio Werdum is confident that having a hometown crowd will give him the edge he needs over Stipe Miocic when the two square off in the headlining bout of UFC 198 on May 14.

The UFC heavyweight title fight will take place inside a soccer stadium that has the capacity to hold over 40,000 people.

Werdum, who submitted Cain Velasquez last year to earn the heavyweight crown, told Portal do Vale Tudo that Stipe Miocic better watch out this May in Brazil (as transcribed by BloodyElbow):

“Miocic will fight against 45,000 Werdums. It’s not that hard to imagine what will happen, but the crowd will enjoy it for sure. Besides, there will be me, who is someone everyone in the crowd can relate to. There will be a lot of emotion at UFC 198.”

The Fabricio Werdum vs. Stipe Miocic heavyweight title fight will headline UFC 198 which takes place May 14 in Curitiba, Brazil.

Who do you have winning this heavyweight main event? Sound off PENN Nation!