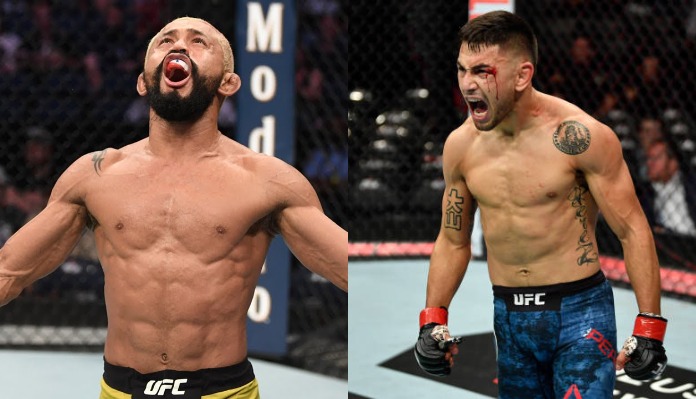 In the main event of UFC 255, Deiveson Figueiredo is looking to defend his flyweight title for the first time when he battles Alex Perez. Heading into the fight, the champ is a -310 favorite while the American challenger is a +240 underdog.

Ahead of the fight, BJPENN.com reached out to several pro fighters to get their prediction for the scrap. The pros slightly lean towards Deiveson Figueiredo to get his hand raised and likely do so by a stoppage win.

Alex Morono, UFC welterweight: Perez is coming off that leg kick TKO win but Figueiredo is legit. He has some serious power and the way he dominated Benavidez I can’t see him losing at flyweight.

Eryk Anders, UFC middleweight: I think Deiveson is a tough matchup for everyone. He can grapple and hits with a lot of power. I know Alex Perez is big and has good wrestling but I think the footwork and striking will be the difference.

Max Griffin, UFC welterweight: I got Figueiredo, he is a beast. Alex Perez is good, but Figueiredo is the truth.

Khaos Williams, UFC welterweight: I think the champ in Figueiredo gets it done. He is very well-rounded and can win however he wants.

Louis Smolka, UFC bantamweight: Alex, he is my boy. He has looked so good lately.

Casey Kenney, UFC bantamweight: I think Perez. I think he has the cardio to drag Figueiredo into the later rounds.

Adrian Yanez, UFC bantamweight: I got Alex Perez. Deiveson Figueiredo is well-rounded and has a very underrated ground game. Honestly, it is such a close fight and I think Perez can outpoint Figueiredo on the feet and have success in the later rounds to win the fight and become the new champ.

Who do you see winning the UFC 255 main event between Deiveson Figueiredo and Alex Perez?