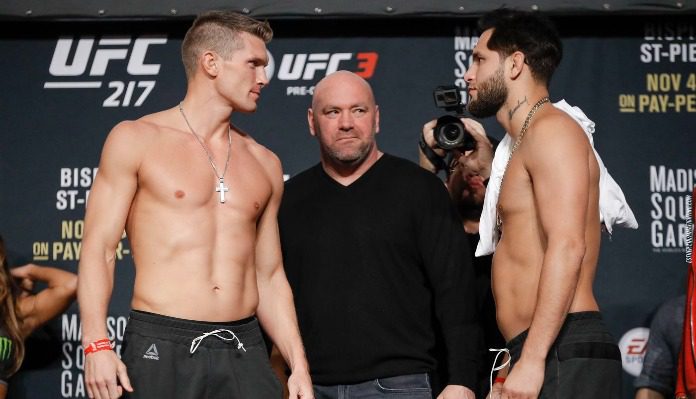 Stephen Thompson is hoping to run things back with Jorge Masvidal next time out.

Both Thompson and Masvidal are on two and three-fight losing streaks, respectively. In those fights, ‘Wonderboy’ was outwrestled by Gilbert Burns and Belal Muhammad, while Masvidal lost twice to welterweight champion Kamaru Usman and was then outwrestled by Colby Covington his last time out. With that, Thompson is hoping the Masvidal rematch happens as he wants to face a striker next time out.

“I would like to fight in May, we will see though. I had some names thrown at me like Robbie Lawler and now Masvidal came off the loss so that would be a fun rematch,” Thompson said on Just Scrap Radio on BJPENN.com. “The NMF vs. the BMF, so yeah man those are the kind of the guys I’m looking at. Give me a striker for my next fight. Don’t give me a wrestler, and the wrestlers are just a different pedigree. I’ve fought wrestlers in the past but now they are on a different level.”

Although Thompson still has the goal of being a UFC champion, Wonderboy admits his past two fights have disappointed him. He says the fights have been boring so he is focused on wanting to fight a striker next time out, which is why he’s interested in the Masvidal rematch.

“It’s not fun fights and the fans don’t like it when guys just hold you down and not really improve anything,” Thompson explained. “With the Burns fight, he just held me there, he was hitting me with a few shots but nothing hurt. I want to get back into some exciting fights, let’s make a standup fight happen. Give me Masvidal, he’s on a losing streak as well so let’s make that happen…

“We have been facing off with some wrestlers and they have been holding us down. So, let’s get two guys that want to stand up and throw hands,” Thompson later added. “We fought in the past but we both have made changes and are both coming off losses, so let’s put us together and give the fans what they want.”

Whether or not the UFC would want the Stephen Thompson vs. Jorge Masvidal rematch is uncertain. But, Wonderboy knows the fan interest is there and it can help boost any pay-per-view coming up in the near future.

“I’ve had a lot of fans tell me they want that fight. After UFC 272, people have told me I have to fight Masvidal again. They could put us as a co-main on a pay-per-view and it would do quite well. People would be excited about it,” Thompson concluded.

Would you like to see Stephen Thompson vs. Jorge Masvidal 2?