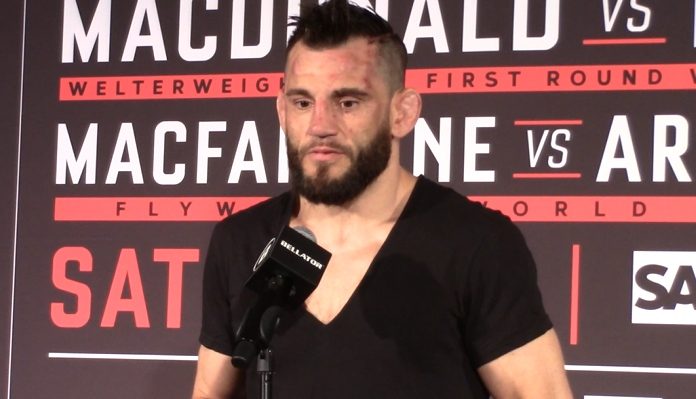 Jon Fitch had his shot to win Bellator gold last Saturday, and many believed he had succeeded by the time the final bell rang.

Fitch, who many counted out, came out and took Rory MacDonald down over and over again and dominated him on the ground. He even won one round 10-8 — but even that couldn’t earn Fitch the win. Rather, only one judge had the fight for the 41-year-old, with the other two seeing it is a draw. This means the fight was ruled a majority draw, and because MacDonald was the champion, he moved on in the welterweight Grand Prix.

Looking back on the fight, Fitch still doesn’t agree with the judge’s scorecards.

“I don’t know. I’m still kind of in shock as you don’t think that would be a possible outcome,” Fitch said to BJPENN.com. “I prepare for the win or the loss, not a tie. I think I won, I think I should be moving on. Now, I just have to sit back and be prepared. I’m probably going to be the first alternate in case someone gets hurt along the way.

“‘Crazy’ Bob [Cook] knows we have bad luck so he wasn’t ready to say I had won it yet,” he added. “He was thinking I was going to win a split decision. Rest of my corner thought we won at least three rounds after watching it back I am pretty certain I won four rounds. So I am not sure what the judges were watching. I don’t know what is going on. We need some new people judging fights I guess.”

Following the draw, Fitch said that it could very well be his last fight. Nearly a week removed from the fight, he still is unsure if he will fight again. The only way he would for sure is if he can get another shot in the tournament.

“I would still be in the million-dollar tournament in that fight. The money, yeah. The title,” he explained. “Otherwise, I get a rematch and I would sit around and wait for the tournament to be over with. I would be sitting out awhile so I don’t know. Just mind my weight and train a little bit here and there. Just kind of keep an eye on the tournament and see what happens.”

If he does fight again, a logical fight would be to a do-over with MacDonald at the conclusion of the tournament. However, if the Canadian goes on to win the Grand Prix, the fight would not happen for possibly a year. Based on that, Fitch is uncertain if he will ever fight MacDonald again.

“Maybe. I don’t know,” Fitch said. “It is going to be a while until that would be possible so we will see.”

The veteran is happy with his performance and believes he did what he needed to do. Although many think MacDonald didn’t look his best in the fight, Fitch believes it is because of how he fought him.

“I think it is whatever. It is fine,” Fitch explained. “I can’t beat myself up for it, I fought my ass off. I fought hard, I think I won the fight. A lot of people won the fight. I’m getting a lot of positive feedback. I didn’t get the belt, but I think at the end of the day I am still the people’s champ. I am alright with that.”