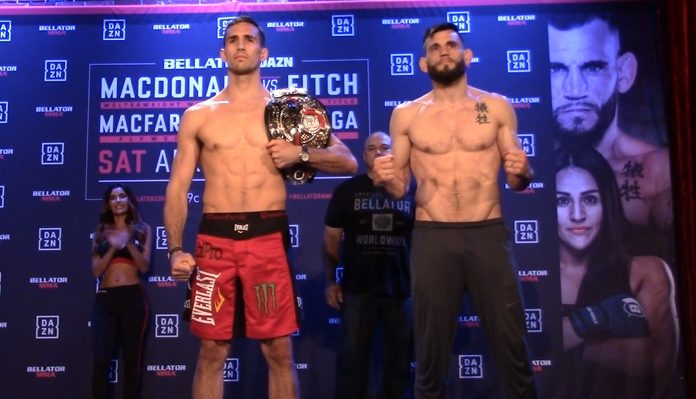 Bellator has brought back life to their old school style of tournaments with their world title Grand Prix’s. And for the welterweight tournament, Bellator 220 hosted the first title fight as the champion, Rory MacDonald, made his first return after an unsuccessful attempt at capturing middleweight gold in his last time out. The extremely season veteran, Jon Fitch looked to make it two losses in a row for the Canadian.

MacDonald rushes forward immediately and cracks Fitch with a hard right hand that stuns him. Fitch retaliates with a single leg attempt. He gets it down slowly as MacDonald threatens with a kimura as he stands back up. Fitch keeps grinding on him but MacDonald goes back for the kimura. They separate and MacDonald throws some shots before defending a Fitch takedown attempt. Another big right from MacDonald lands. Fitch has a cut in his hair somewhere. MacDonald backs Fitch up and is stalking. Fitch shoots for a takedown and gets it big this time. Fitch works ground and pound to the body as the round closes.

Fitch goes for an early takedown that he gets very briefly. Fitch lands a stiff uppercut that gets MacDonald’s attention. Fitch goes for another takedown, backing MacDonald into a corner. Fitch drags MacDonald to his knees but he bounces up and gets away. MacDonald lands a head kick which Fitch catches momentarily. Right hook from MacDonald is followed by a brief grabbing of the leg from Fitch. MacDonald keeps the pressure heavy on Fitch against the cage. Fitch tries to jab his way out. Body kick from MacDonald. Fitch begins to press forward and land solid uppercuts. After that, a takedown gets landed on MacDonald but he wall walks up. Fitch throws a head kick this time that’s caught and MacDonald takes him down before the round ends.

MacDonald lands a head kick early in the third but Fitch quickly goes for another takedown that he gets. He starts working punches to the body. MacDonald tries to wall walk again after a minute on the bottom but Fitch won’t have it. Fitch really starting to grind on the champion. MacDonald attempts an armbar but Fitch is onto it almost instantly, he continues dropping punches. A dominant round for the vet ends.

Fitch jabs on MacDonald early. Cracking elbow lands on Fitch as he comes in for a takedown. MacDonald thwarts it, lands a head kick and stops another takedown. He keeps on pursuing it but MacDonald lands hard punches and elbows. Eventually, Fitch hits a small takedown as MacDonald gets up fast. After pressing him against the cage for a bit, Fitch lands the takedown. Fourth round ends with more short shots from the challenger.

Fitch shoots in early in the final round twice. The first doesn’t work but the second does, MacDonald on his back once again. MacDonald throws up a triangle which is hard to tell how tight it is. He loses it as Fitch continues grinding him to the fence from top. Fitch remains too heavy on top as MacDonald attempts to wall walk. MacDonald is able to walk back up in the last 25 seconds but can’t create separation. Fight ends as a draw. MacDonald will advance in the tournament as he remains champion.