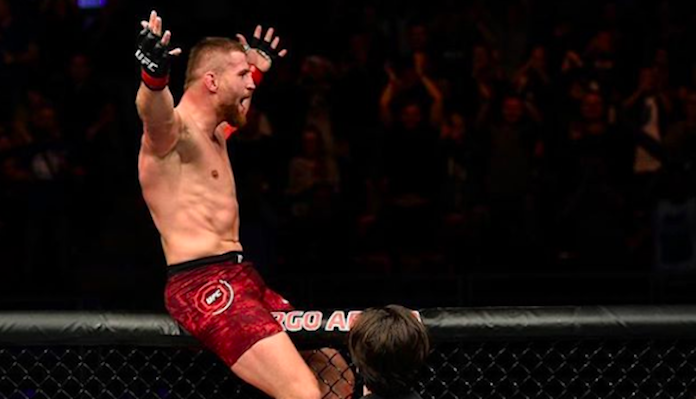 Jan Blachowicz is constantly a betting underdog and when he fought Dominick Reyes at UFC 253 for the vacant light heavyweight title, that was no different.

Blachowicz was around a +210 underdog and pulled off the upset with a second-round knockout over Reyes. For the Pole, he says the fight went better than he even anticipated.

“Even better. I told you I thought I would win in the third. So, to win in second is better than I thought,” Blachowicz said on Just Scrap Radio on BJPENN.com.

In the fight, Jan Blachowicz was landing heavy body kicks which he admits wasn’t part of the gameplan. However, he saw the opening and went after it, and after he landed the first one, he knew the fight was his.

Blachowicz says he saw Reyes slow down immediately and then when he broke his nose, there was no doubt the Pole would get his hand raised.

“The game plan was to kick the legs. I always use my left leg to kick the body or head, even if my coach says don’t do it I always do. I’m born with a good left kick,” Blachowicz said. “When I kicked him the first time I saw him slow down, that was important. Then I started to use the kick and I knew he felt it.

“The second round, I just remember I broke his nose. His face told me the fight would be over soon,” he later added. “When I broke his nose I knew I had to be careful as he had to put me out with one punch and twenty more seconds I would be able to get the finish. All my opponents are going to feel the legendary Polish power.”

Jan Blachowicz is taking in his win and hopes people will stop overlooking him and believing in his power.

Blachowicz is back home and waiting for the arrival of his child in December. Once that happens, he says the plan is to fight in March where he knows he will likely face the winner of Thiago Santos vs. Glover Teixeira.

“March would be perfect. In December I will have a child so I have to focus on that. Before my fight, everything was about me so now I want to focus on my fiancee and wait for the baby,” he said. “After New Year, three months for a good camp would be the perfect time for my first title defense.

“I think it is the most likely outcome that I fight Thiago or Glover next. We will see what UFC does,” he concluded.

Do you believe in Jan Blachowicz’s legendary Polish power after UFC 253?