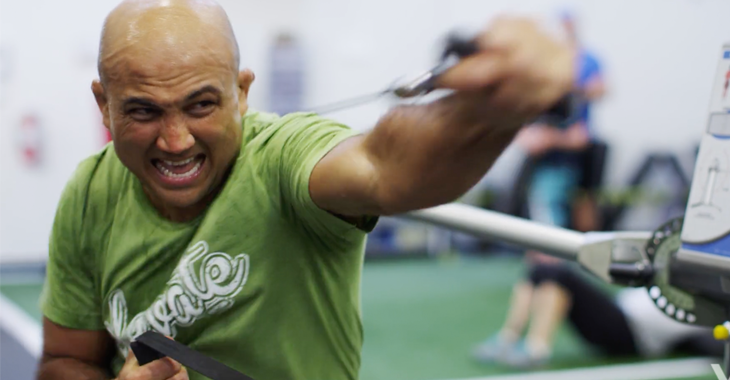 Last weekend, on the main card of UFC 203, former WWE star CM Punk came up short in his long-awaited UFC debut, tapping to a first-round rear-naked choke applied by the young Mickey Gall.

When it was first announced that Punk had signed with the UFC, the reaction was almost universally negative. Here was a guy, after all, who was waltzing onto the sports biggest stage with no martial arts experience. It was an overt publicity stunt on the part of the UFC, and opportunity Punk wasn’t believed to deserve.

As Punk’s debut grew ever closer, however, opinions on the whole ordeal began to change. Fans and fighters alike saw how hard the pro wrestler was working, and many eventually began to respect him. Even after his lopsided loss to Gall, the majority of the fight game seemed to admire the former pro wrestler for his guts – that includes our very own BJ Penn.

In an exclusive interview with BJPenn.com’s “Rapid Fire,” Penn weighed in on Punk’s recent debut.

“You know what, on the day of the fight, I was like ‘you know what, this is kind of cool that CM Punk is gonna come in here and fight today’,” Penn said. “I went to give him a Tweet and be like ‘man, good luck, give it your all out there.’ I guess the day of the fight I started rooting for him a little, but the guy who he went up against was a real tough kid too. It was fun to have him [in the Octagon]. Now everyone knows who Mickey Gall is, and CM Punk got to try it out and see what it’s like.”

While many members of the MMA community, including UFC President Dana White, seem to think one fight was enough for the 37-year-old Punk, Penn is of the opinion that there’s little harm in giving the WWE import another shot in the Octagon.

“Maybe CM Punk should try to fight again,” Penn said. “Mickey Gall is a beast, and he’s hungry, so that’s just a tough fight period for anybody, I would think, unless you were the champion or something. That might even be a decent fight. Mickey Gall is tough, and you can tell he’s a good guy. CM Punk went in there with a really good guy. I thought it was cool, I liked it.”

“He already did fight [once], you might as well give him a second one,” Penn continued. “People will say ‘no he doesn’t deserve a shot.’ Well, did he deserve the first one? He did It already. Now, he’s going to be more comfortable and seasoned. What if he gets a win on the next fight?”

Though Punk earning a win in a possible second fight is certainly unlikely, Penn reassured that his doing is not out of the question. In fact, Penn believes that if Punk were to sharpen up his ground game, he might actually be able to deliver a fairly entertaining fight.

“We still don’t know if CM Punk can get knocked out, so maybe they should do all his training in defending submissions,” Penn said. “Then if nobody can submit CM Punk, nobody can get his arm or get his neck, then maybe we can see CM Punk in a war with somebody. I don’t know if CM Punk’s going to be easy to knock out. If he can just stop a submission, then maybe we can have fun and watch CM Punk in a war.”

So there you have it. One of the sport’s true legends supports CM Punk, and endorses him being given a second shot in the UFC.

Do you agree with BJ Penn, or is it time for Punk to give up on his Octagon dreams? Sound off, PENN nation!