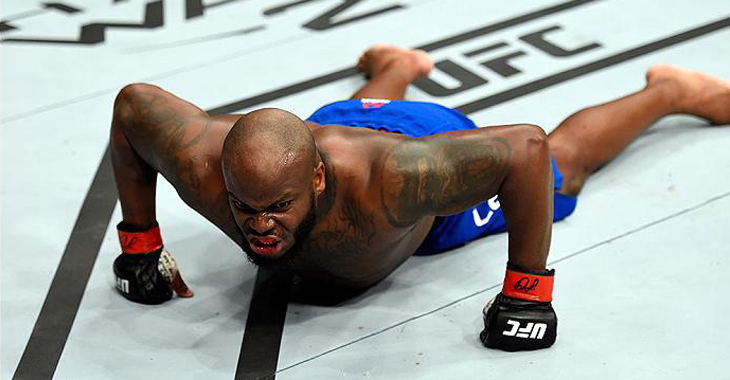 UFC heavyweight Derrick Lewis looks to have reached a new level of stardom following his win over Travis Browne at UFC Fight Night 105 in Halifax, Canada, which took place this past weekend.

“The Black Beast” threw some additional verbal shots at Browne after knocking him out in the second round of their main event fight, bringing up Browne’s alleged history of domestic violence. Lewis took it a step even further and gave a shout out to Browne’s current girlfriend, former UFC women’s bantamweight champion Ronda Rousey. Lewis did not stop at the post-fight Octagon interview. He kept up with his shots at Browne in the post-fight interview with the press and has posted quite a few social media posts aimed directly at Browne and Rousey. In one of Lewis’ latest social media posts, “The Black Beast” said in his video caption that he went to visit and surprise his little brother at school. It surely did make for a big surprise as one of the workers at the school announced that Lewis had just won his fight on Sunday and was greeted by an army of students waiting to shake his hand as his little brother sat down and ate his lunch quietly.

I tried to surprise my little brother at school today

Interestingly, Lewis also posted a video at a doctor’s office after the fight with Browne and said that he broke his foot. In this video visiting his brother, Lewis looks to stand up and shake all the students’ hands without any problem. The UFC Fight Night 105 Halifax medical suspension list states that Lewis is suspended for 30 days with no contact in training for 21 days due to a “hard bout.” Lewis said in his Octagon interview that he wants a break from fighting for the next three months after his active schedule over the past year.

Who would you like to see Derrick Lewis take on next in the Octagon? Let us know your ideal matchup in the comment section!