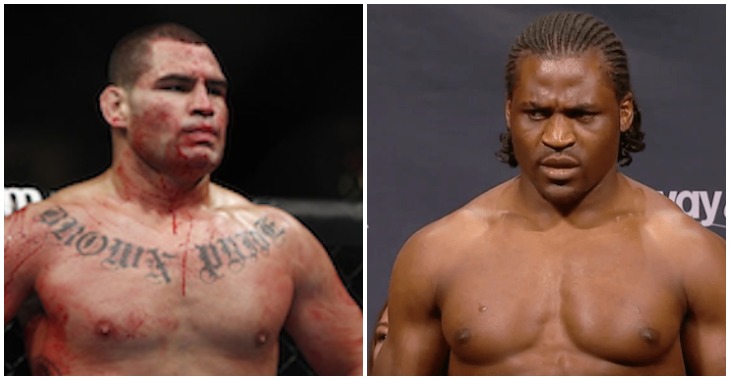 Last Saturday, on the main card of the UFC’s latest trip to Denver, Colorado, French-Cameroonian heavyweight prospect Francis Ngannou faced the biggest test of his career in former UFC heavyweight champion Andrei Arlovski. The rising star passed this test with flying colors, thumping Arlovski to a first round TKO victory.

With this win, Ngannou continues his destructive march through the heavyweight rankings, and is now probably just a few wins away from a heavyweight title shot.

During an appearance on Monday’s episode of The MMA Hour, the hulking heavyweight used his ever improving English to explain that he’s hoping for a massive step up in competition in his next fight. Though he said he would settle for bouts with former Strikeforce champ Alistair Overeem or former UFC champ Junior Dos Santos, he explained that his ideal next step would be a fight with former UFC champ and bona fide heavyweight great Cain Velasquez.

“I [need] three or four months [to rest],” he said of his immediate future. “I think Velasquez will be ready at that time. I think about Velasquez, Overeem and Dos Santos.”

“Velasquez,” he said, when asked which of these three heavyweight greats he’d prefer to fight next. “I believe, I trust,” he continued, when asked if he thought the UFC would give him this mammoth opportunity.

With his defeat of Arlovski, Ngannou improved to 5-0 in the UFC, with all of those wins occurring by way of knockout or submission.

Velasquez, meanwhile, has not stepped into the cage since July, when he mauled Travis Browne to a first-round TKO. Prior to this win, Velasquez gave up the heavyweight title to Fabricio Werdum after a long stretch on the injury list. Though his recent career has been marred by injuries and long layoffs, he remains one of the consensus best heavyweights on earth.

Would you be interested in a Cain Velasquez vs. Francis Ngannou bout? If so, who do you think comes out on top? Sound off, PENN Nation!