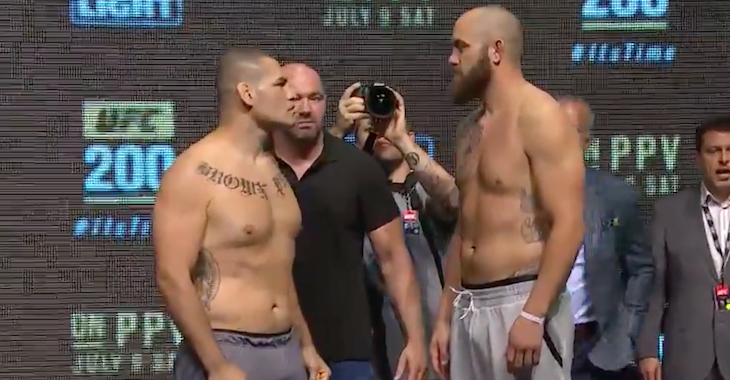 Round one begins and Velasquez quickly takes the center of the octagon. Browne with a nice right hand over the top. Cain comes back with a leg kick. Velasquez presses forward with some jabs. He lands another leg kick. Travis responds with a knee to the body. Cain fires back with a knee in the clinch position. He presses Travis against he cage. More knees score for Cain. He lands some short shots inside on Browne. They break. Travis misses with a right. Cain with a leg kick and then another. Browne circles away. Cain with another leg kick. He throws a combination and gets inside. Velasquez tags Browne with a big punch. Travis falls to the floor. Cain follows him. He begins landing punches from top position. Nice short elbows from Velasquez. He gets a hold of the neck but Browne is able to defend. Nice shots from the top by Cain. Browne is able to stand back up but Cain has his back. Browne scrambles free. He eats a left hook from Cain and is wobbled. Back to the ground and Cain is all over him. He flattens him out and begins hammering Travis with punches. It is all over.

Velasquez TKO’s Browne at 4:57 of round one