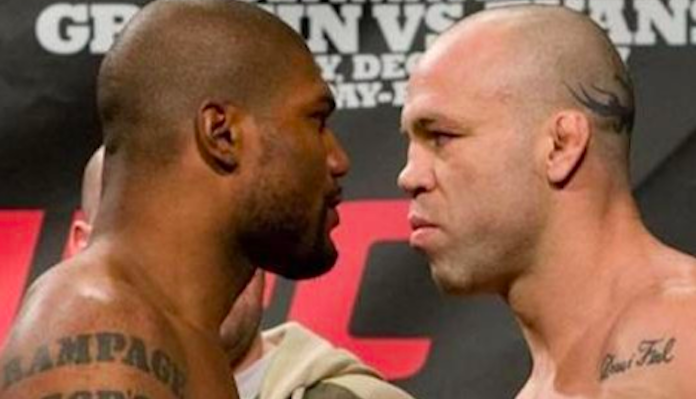 This will mark the fourth time that “Rampage” and “The Axe Murderer” have squared off during their storied careers.

Wanderlei won the pairs first two meetings, which took place under the now defunct PRIDE FC banner, ending both of those fights with some brutal knees in the clinch.

When the fighters eventually took their talents to the UFC, Quinton Jackson was able to get a dose of revenge on the Brazilian standout earning a devastating one-punch first-round knockout victory at UFC 92.

Tonight’s fight will mark the first time that Wanderlei Silva and Quinton Jackson have met at heavyweight.

Round one begins and Jackson quickly takes the center of the cage. Wanderlei meets him there and throws a left jab that misses. “Rampage” is looking to fire off his right hand. Silva circles and paws with his left. Jackson pressuring early here. Wanderlei tells him to come inside. Jackson does and Silva fires off a wild flurry. “The Axe urderer” misses with a hook and Jackson clips him with a left. That appears to rock Silva. “Rampage” comes forward and they clinch. Silva appears to have recovered. He lands a knee and then breaks free from the clinch. Wanderlei with a looping left hand. Silva circles along the cage. He misses with a high kick but lands a nice right hand behind it. Quinton seems to be ok and comes forward with a right hand that misses. Wanderlei Silva with a nice jab to the body. Quinton leaps in with a right hand and then pushes Silva up against the cage. Wanderlei gets free and fires off a head kick. Quinton returns fire with a right hand. Silva circles along the fence and Quinton says to meet him in the center of cage. Wanderlei fails to oblige Jackson’s request and the horn eventually sounds to end round one.

Round two begins and both men come forward and meet in the center of the cage. Wanderlei lands a chopping low kick. That appears to get Quinton’s attention. Silva fires off a right hand after dodging a left from Quinton. The fighters start firing off shots from the pocket. This is absolute madness as both men swing for the fences. Quinton finally decides to exit the pocket and circles out. Silva with a nice low kick. “Rampage” just misses with a right hand. Wanderlei counters with a looping right hand over the top. Jackson is utilizing a lot of pressure now. He lands a massive right hand that sends Silva crashing back into the fence. Wanderlei is in trouble but he fires off a knee from the clinch. “Rampage” lands a pair of uppercuts before “The Axe Murderer” breaks free. Another big exchange in the pocket. This time Quinton is able to force the clinch and pushes Silva against the fence. Ninety seconds remain in round two. Quinton lands an uppercut and then Wanderlei fires off a pair of hooks. Silva circles along the cage now. Jackson walks him down and then lands a massive right hand. Silva drops. Quinton Jackson with hammer fists and body shots now. This one is all over!