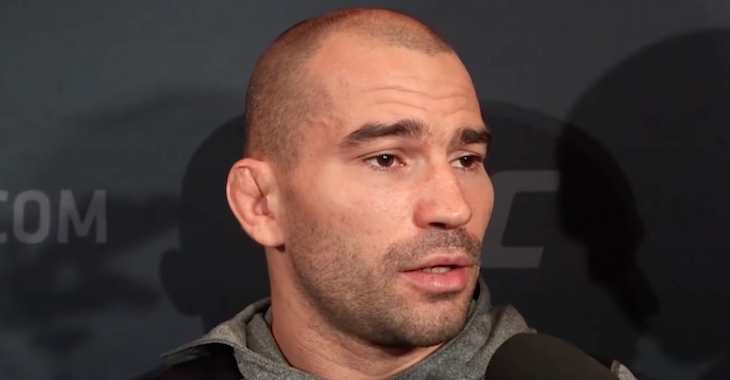 When Artem Lobov stepped onto the canvas with Cub Swanson in April, he did not produce a win. He did, however earn the respect of the fans and his fellow fighters – many of whom suggested he didn’t deserve a fight with Swanson to begin with – by battling the elite featherweight for five, fun rounds.

In the wake of his action-packed loss to Swanson, Lobov has received a handful of callouts from other fighters. One such fighter was UFC veteran Robert Whiteford, who is apparently in talks for an Octagon return when the UFC touches down in Glasgow later this year.

“I would love to fight Artem Lobov on the Glasgow card, I think that would be a great fight,” Whiteford said in an interview with Metro. “He’s done great in the UFC right now.”

Another of Lobov’s suitors was UFC lightweight John Makdessi, who called him out out with a Barney-inspired poem on Instagram.

Apparently, however, neither of these potential opponents are especially interesting to Lobov. In a Tuesday morning video post to Twitter, the Russian-born Irishman addressed Makdessi and Whiteford, and reaffirmed that a fight with South Korea’s Doo Ho Choi is the one he wants.

One by one or all at once, The Russian Hammer fears no one!!! pic.twitter.com/TEjNJWxmQG

“Makdessi,” a rhyming Lobov began, “You wrote me a poem, you think you look cool? Don’t flatter yourself, you desperate fool.”

“And I’ve seen Whiteford calling me out,” Lobov continued. “You’re not in the UFC, so I’m not even going to address that. The Korean Superboy is the fight that I want right now, but I’ll take anyone, and Sean Shelby knows that. I sent him a message saying whoever he sends me, that’s the fight I’m going to take. I’m not even going to look at the name. So all you motherfuckers trying to call me out, you send Sean a message and ask for me. If he sends me the contract, well then you’re on.”

Who do you want to see Artem Lobov fight next?