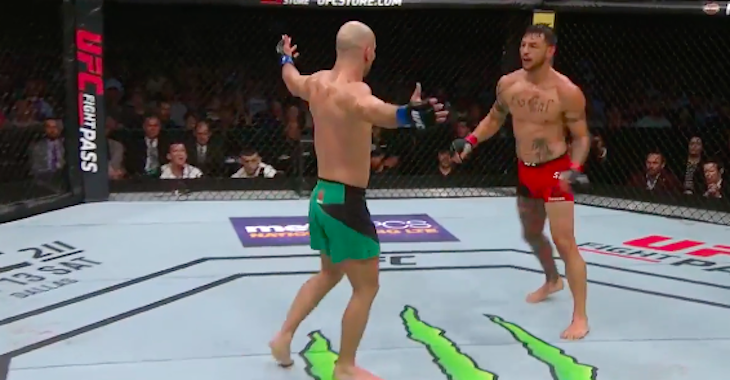 Last night, the UFC touched down in “Music City,” Nashville, Tennessee, with a 13-fight card. This card featured plenty of action, as Brandon Moreno scored an epic submission win over Dustin Ortiz on the undercard, Mike Perry picked up an elbow-induced KO of the year contender over Jake Ellenberger, and Al Iaquinta crushed Diego Sanchez in the co-main event. Though the main event, which pitted the UFC’s fourth-ranked featherweight Cub Swanson against Conor McGregor training parter Artem Lobov, did not produce a stoppage, it was no exception to the exciting tone of the card.

As a massive betting underdog, Lobov was given little chance against his well-established foe. That said, the Russian-born Irishman hung in there remarkably well, even arguably winning the first round. In the second, however, Swanson began to find his groove, punishing his foe with a dizzying array of strikes – from jumping switch kicks to spinning elbows. Amazingly, Lobov was able to eat everything the powerful Swanson threw at him, which meant that fans got to enjoy five wild rounds of action.

Unsurprisingly, this spirited battle between Swanson and Lobov also generated some interesting reactions from their peers. Here are some of the best pro reactions to UFC Nashville’s fun, five-round main event.

So far Lobov doesn't look like he's in over his head. Good 1st round. Cub will have to turn it up on him

One thing about fighting is you can't underestimate anyone in that octagon. Records don't matter once that door closes!

Artem Lobov is nails but #KillerCub is on another level and really gettin' warmed up here in R3.

Some very pretty stuff in that round by @CubSwanson #UFCNashville

@CubSwanson taking it to him now!!! High level experience starting to show

If Lobov goes five, no matter how badly he's outclassed, it's a win. If he makes it close? Big, big win. #UFCNashville

This main event reminds me of an episode of bully beat down. No more top 5 vs unranked. Please. Thanks. #4 vs "he's tough tho" #UFCNashville

The way Lobov stands, I can never tell if he's rocked or not. 🤔 #UFCNashville

I'M getting a headache watching Lobov eat all those shots.#ufc

@RusHammerMMA is a true warrior so much heart much respect ✊🏼 🙏🏻

That was a good fightttt

Congratulations to @CubSwanson and @RusHammerMMA on a great fight in Nashville!

Lobov showed he can take a punch, but Swanson clearly was the better fighter . #UFCNashville

In the end we only regret the chances we didn’t take, the relationships we were afraid to have,and the decisions we waited too long to make.

fantastic effort from @RusHammerMMA , we're all very proud of you back home. great job in corner by @rowdyowenroddy and @richie_smullen

With his defeat of Lobov, Swanson moves onto a four fight win-streak. Prior to his defeat of Lobov, he engaged in a 2016 fight of the year contender with Doo Ho Choi. This unforgettable war, meanwhile, was preceded by decision defeats of Tatsuya Kawajiri and Hacran Dias. Now 25-7 in sum, Swanson could well be the featherweight division’s number one contender.

In defeat, Lobov returns to the loss column after back-to-back decision defeats of Chris Avila and Teruto Ishihara. His overall record has fallen back down to the .500 mark at 13-13-1, but in battling Swanson for five rounds, he more than proved he belongs in the UFC.

What did you think of Cub Swanson and Artem Lobov’s Nashville war? Sound off, PENN Nation!