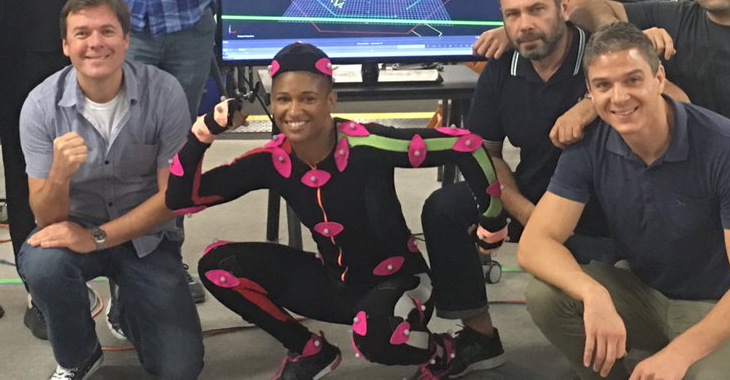 If your thumbs have gotten a rest from trying to perform Demetrious Johnson’s suplex into an armbar on EA Sports UFC 2, don’t let you callouses soften up too much because there is a new game coming early next year. Throughout the last year and a half, they’ve added new fighters to the previous edition but some still never made the cut. While there is no list currently for all the UFC fighters that will be in the new game, you can bank on Angela Hill being in EA Sports UFC 3. She recently went through a motion capture session and there are tons of behind-the-scene pics.

Had a blast in studio with the good folks at #EASports. Can’t wait to see the final product! #GamerBecomesTheGame #MotionCapture #DreamJob pic.twitter.com/2q4KxE8eWX

It was a pleasure. You did a great job. People are going to lose their minds when they see the results in game. Thanks for the enthusiasm.

Angela Hill recently made her UFC return after tearing her way through Invicta FC, now she was able to make a dream of hers come true by being in a video game. Hill is a lifelong gamer who can be seen streaming on Twitch when she’s not inside the Octagon. She’ll even be competing with Demetrious Johnson and Jens Pulver in a H1Z1 tournament at TwitchCon on October 21st. Other UFC fighters who have recently been motion captured for the new game are Carla Esparza and Kailin Curran.

#TBT to emphasize how stoked I am about my last post! #VideyaGames #Playstation #InnerChildGeekingOut #Gamer #Fighter @PlayStation pic.twitter.com/q52abIMiep