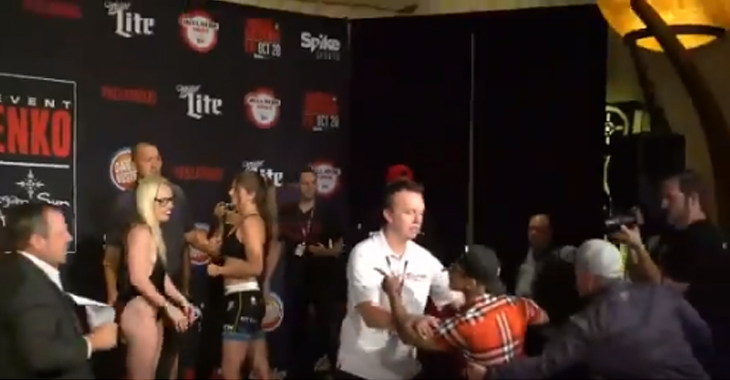 Heather Hardy is an MMA promoters dream. She’s an undefeated champion boxer who wanted to jump ship and she’s down to scrap with anybody. Not only can she talk trash, but she also gives an insightful interview and has an incredible backstory. She won her Bellator debut and will look to continue her successful MMA journey tomorrow night at Bellator 185 against Kristina Williams, but she never expected to be outnumbered at the weigh-ins. Out of nowhere, a women ran up shouting at Hardy who just happened to be one of her former opponents.

An altercation between Heather Hardy and an ex-boxing opponent was by far the highlight of #Bellator185 weigh-ins https://t.co/Mows1zAQyq pic.twitter.com/6nLuyIjiZv

According to MMA Junkie, that woman was Shelly Vincent,She lost a decision to Heather Hardy in boxing last year, which awarded  Hardy the vacant WBC international female featherweight title. The loss and rivalry is evidently something that Vincent isn’t ready to let go. Was this just out of a genuine dislike of Hardy, or is Vincent thinking of using this as a springboard into MMA herself? Hardy as made a name for herself pretty quick and is gaining some hype around her, a rematch of their boxing match in Bellator’s cage could be great for everyone.

Check out Heather Hardy and Shelly Vincent’s entire boxing bout down below.

“I feel like [Heather Hardy]’s everything that’s wrong with women’s boxing. She’s a way better fighter than she was a few years ago but she’s not what they say she is. They built her up. I watched people get robbed by her. I might bring some cops up to prepare for a robbery.” — Shelly Vincent on Heather Hardy back in August of 2016.