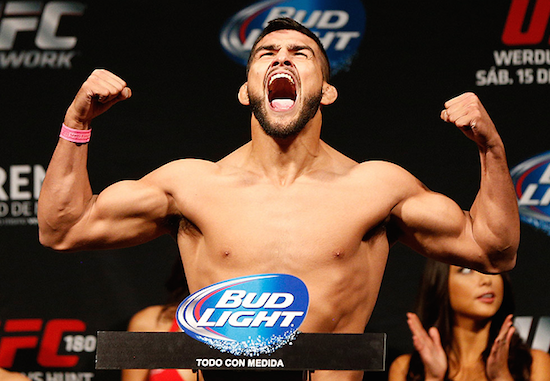 Once it was announced that Luke Rockhold was fighting Robert Whittaker in Perth for the middleweight title, Kelvin Gastelum took to social media to voice his opinion and declare that he thought he was worthy of the shot. While it’d be easy to see Gastelum sitting on the sidelines waiting to see how that fight played out, it looks like he was offered a big fight with Yoel Romero to headline an early 2018 Brazilian card. According to Romero’s manager, the fight was turned down by Gastelum.

It appears that this was the planned main event for #UFCBelem, Brazil on February the 3rd. https://t.co/O7duyUMv5v

“I knew Luke Rockhold and I were both in the front-running for this fight. I was then told Robert Whittaker wanted the tougher fight and he picked Rockhold. In my opinion that is the easier fight because I feel I’m the toughest fight for anyone in this division. I think Whittaker took the easier fight by going with Luke. He’s absolutely worried about me and for good reason. He and I have trained together in the past and know what the other is all about. We know what the other brings to the table.” — Kelvin Gastelum speaking to FloCombat.

From a Devil’s Advocate standpoint, it makes sense if Kelvin Gastelum refused the fight. With his KO over Michael Bisping, even if he wasn’t chose this time to fight Robert Whittaker, he most likely believes he’ll be fighting the winner who walks about the UFC middleweight champion at UFC 221. However, it is an awesome match-up that we would like to end up seeing at some point down the line. No word on who Yoel Romero would fight instead of Gastelum, especially since Ronaldo “Jacare” Souza is already booked. We may be looking at a rematch with Chris Weidman if this fight doesn’t get done.