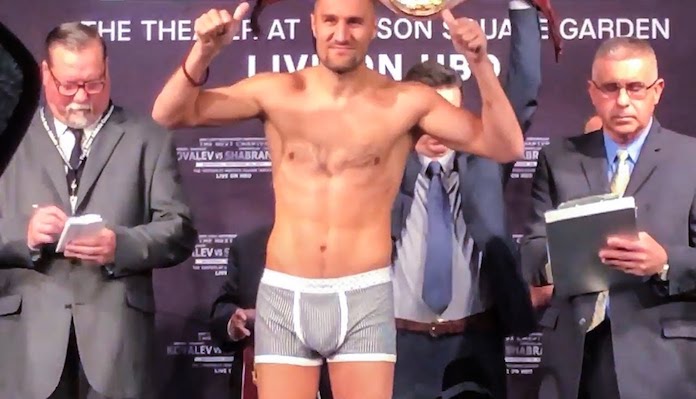 BoxingScene.com’s Dan Rafael reported that Kovalev tested positive for synthetic testosterone in a VADA drug test administered on December 30 in Las Vegas. The test came back on Wednesday and Team Kovalev was alerted of the positive drug test. This means that Kovalev’s fight with Melikuziev, which was set to take place in California, is likely going to be canceled. The letter that VADA sent out was leaked in the report and shared for fans and media. Below is what VADA said about Kovalev.

“Adverse analytical finding: IRMS (isotope-ratio mass spectrometry) results are consistent with exogenous origin of testosterone and metabolites,” the letter stated. VADA also made sure to note that Kovalev has requested the right for an analysis of his ‘B’ sample at his own expense. Kovalev’s team provided the following statement.

“We are aware of the adverse finding from VADA. Sergey Kovalev has been proven to be a clean fighter throughout the many years that he has been tested by VADA. VADA was contracted for this fight at his insistence, as he has requested for almost all of his fights going back several years. He maintains that he did not purposefully ingest any banned substances. We have made arrangements to have his supplements tested for contamination and will request that VADA test his B sample,” Main Events CEO Kathy Duva, Kovalev’s promoter, said.

Kovalev (34-4-1) missed the entirety of 2020 due to various issues outside of the age, including a DUI. He’s also facing assault charges. In his last outing, Kovalev lost by knockout to Canelo Alvarez in November 2019. With this positive test, it puts his upcoming fight against Melikuziev in serious jeopardy of happening. Of course, he’s also in danger now of being suspended, but first, he will get his ‘B’ sample tested.

How do you think this positive test impacts the legacy of Sergey Kovalev?