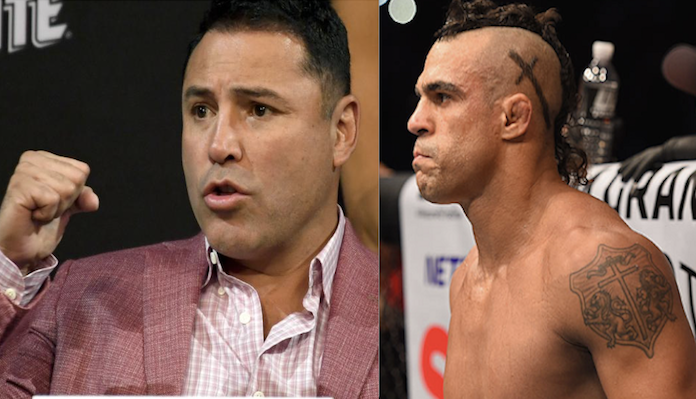 Boxing legend Oscar De La Hoya has been deemed out of the Vitor Belfort boxing match, and Evander Holyfield is expected to step in instead.

TMZ Sports first reported the news that De La Hoya is out of the Belfort fight, which was scheduled to take place on September 11. Instead, Belfort will fight Holyfield now, although the fight has not been officially sanctioned yet. Either way, De La Hoya is out of the fight and on Friday afternoon he announced to his fans he the reason he is out is due to COVID-19. According to De La Hoya, he is fully vaccinated but still contracted the coronavirus.

Wanted you to hear directly from me that despite being fully vaccinated, I have contracted Covid and am not going to be able to fight next weekend. Preparing for this comeback has been everything to me over the last months, and I want to thank everyone for their tremendous support. I am currently in the hospital getting treatment and am confident I will be back in the ring before the year is up. God bless everyone and stay safe.

It is certainly disappointing to see the De La Hoya vs. Belfort fight fall apart as fight fans were looking forward to this matchup pitting the boxing legend against the MMA ace. De La Hoya has not competed in 13 years since a loss to Manny Pacquiao, while Belfort has not competed in three years since a loss to Lyoto Machida in the UFC. Fortunately, it appears that Belfort will still stay on the card against Holyfield, although that fight will still need to be sanctioned. The other big fight on the card features former UFC champions Anderson Silva and Tito Ortiz going at it.

Who do you think wins this boxing match between Vitor Belfort and Evander Holyfield?