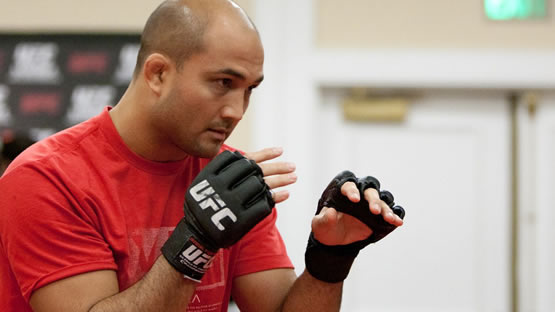 One of the most infamous images of Penn during his legendary career in the UFC was seeing him lick the blood off of his gloves following his wins over Joe Stevenson and Sean Sherk inside the Octagon. “The Prodigy” beat down both men in the Octagon and after vanquishing them, he licked his gloves, which has become a meme all to itself in MMA.

During Sunday’s Paul vs. Woodley fight, at one point in the fight, Paul licked his gloves after he punched Woodley. Of course, there was no blood on the gloves since he wasn’t able to cut open Woodley in the fight, but he decided to lick them anyways. Penn, who saw what happened, was not a fan of the way Paul tried to copy him. Taking to his social media following the Paul vs. Woodley card, Penn trashed Paul for copying his famous move.

Don’t ever copy me again you f*ckin pussy, look at my gloves, look at the pillows on your hands 20 years of war! #mankinestuff @jakepaul #kindergarten

In addition to Penn having a comment about Paul licking his gloves off, Woodley also jumped into the comments beneath Paul’s post and suggested that Paul had no business licking off the gloves, writing the following: “And he had no blood. I’m still pretty.”

Paul previously was called out by Penn following his win over Ben Askren back in April, but Paul instead chose to fight Woodley. Now that Paul has defeated Woodley via split decision, it’s possible he will turn his attention to other UFC legends, and Penn is always a possibility.

Do you want to see Jake Paul fight BJ Penn in boxing?