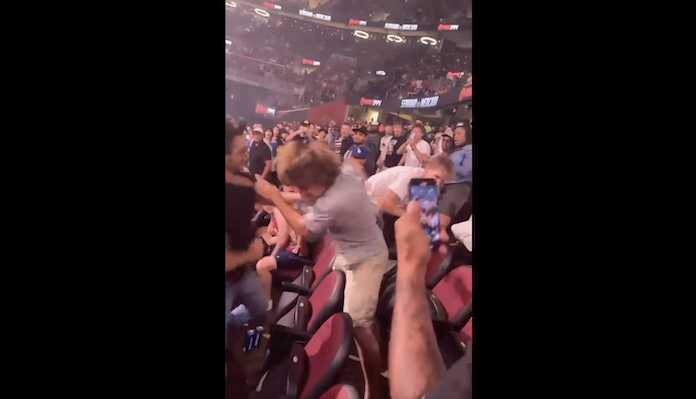 Fights broke out in the crowd during Sunday’s Jake Paul vs. Tyron Woodley event, and you can see the videos of what happened with the fans.

Paul, the former Disney star and YouTube star, participated in his fourth pro boxing match against Woodley, the former UFC welterweight champion who was making his debut in the sweet science. The fight, which served as the co-main event of the evening, was closely fought for eight rounds but ultimately it was Paul taking home a narrow split decision. In addition to Paul vs. Woodley, the main card also featured four other fights. But there were also a number of fights that broke out in the crowd between the alcohol-fueled fans.

Take a look at one of the crazier fights that broke out last night at Paul vs. Woodley below.

We often see these types of brawls in the crowd when there are big fights like this. Between the fights going on in the ring and fans drinking alcohol in the crowd, we often see people getting heated up and resorting to using their fists. In the incident at the Paul vs. Woodley event above, it looks like there was a pretty big fight that broke out between the fans. It doesn’t look like anyone was seriously injured but still, it was a pretty big fight.

As for Paul and Woodley, they were the big stars of the show, especially Jake Paul, who was the one who walked away with getting his hand raised in the fight. Following the win over Woodley, Paul will have the ability to draw another big-name opponent for his next fight. There have already been suggestions that he could have a rematch against Paul, but he could also fight someone such as Tommy Fury or even Conor McGregor next instead.