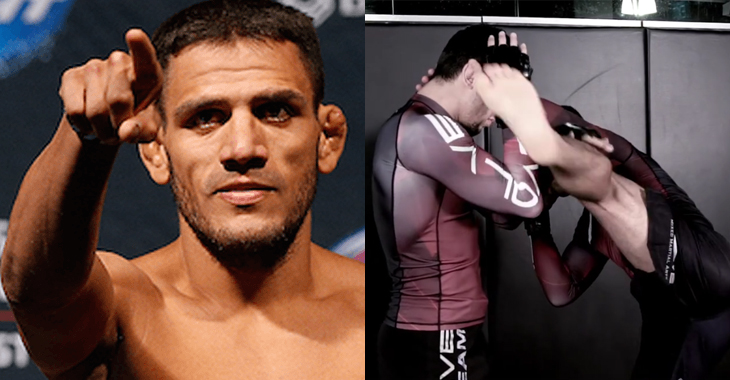 This video was first published on Evolve MMA.

Former UFC lightweight champion Rafael Dos Anjos is one of the world’s most devastating strikers. The 32-year old’s ability to stop an opponent has led him to a plethora of highlight reel finishes. He is known as one of the most relentless offensive fighters in the UFC.

Throughout his career he has defeated some of the UFC’s biggest names. Between 2014 and 2015 alone, Dos Anjos beat Benson Henderson, Nate Diaz, Anthony Pettis and Donald Cerrone. That’s an impressive list of elite fighters. One of the things Dos Anjos is known for is his ability to throw vicious head kicks.

In this recent tutorial video by Evolve MMA, Dos Anjos reveals the secret to throwing that knockout head kick. With enough practice, anyone will be able to mirror Dos Anjos’ unique style.

Standing next to the 6-foot tall Brazilian jiu-jitsu world champion Bruno Pucci, Dos Anjos tells students to first lead with a left-right punch combination. This is so the kick isn’t telegraphed and chances of landing it would become higher.

Check out how Rafael Dos Anjos sets up his head kick

Next, the lead foot steps outside of the opponent’s lead foot. What comes next is the secret to Dos Anjos’ technique. He then throws another cross, but this time, it isn’t intended to connect but rather to grab the back of an opponent’s head, holding it in place.

With the opponent’s head stationary, Dos Anjos is now able to throw and connect a head kick with full force. It’s a clever tactic that promises to be both useful and effective.

Dos Anjos hasn’t competed since November of last year, when he dropped a unanimous decision to Tony Ferguson. The former lightweight belt holder is scheduled to return to the Octagon this June against Tarec Saffiedine in Singapore. This time however Dos Anjos has left the lightweight division behind and is competing as a welterweight.