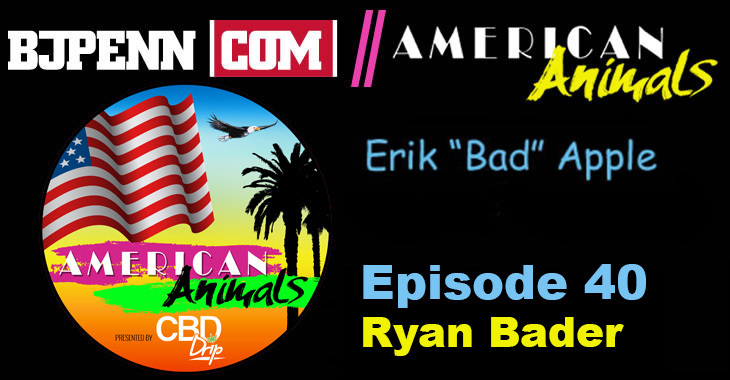 On this episode of American Animals, the Animals are back in the studio, and here to rock your week! Erik Apple and TJ De Santis are here to discuss the biggest and best news in all of MMA. The guys tell us about some of the biggest upcoming matches this summer, as well as the rumors swirling around a possible return for Georges St. Pierre at UFC 213 in New York. Plus, the guys discuss Vitor Belfort’s retirement fight versus Nate Marquardt at UFC 212 in Brazil, Michael Bisping’s choice words for Belfort and Marquardt, and Cris Cyborg appears to have a willing opponent in Invicta FC Champion, Megan Anderson, for UFC 214.

Plus, Erik and TJ have a chance to sit down and talk to the newest Bellator signee and championship contender, Ryan “Darth” Bader. Bader, winner of “Ultimate Fighter 8“, has been a fan favorite for years in the UFC and looks to bring that support to Bellator 180 when he makes his debut versus Bellator Light Heavyweight Champion, Phil Davis. Step inside the octagon with this episode of American Animals!