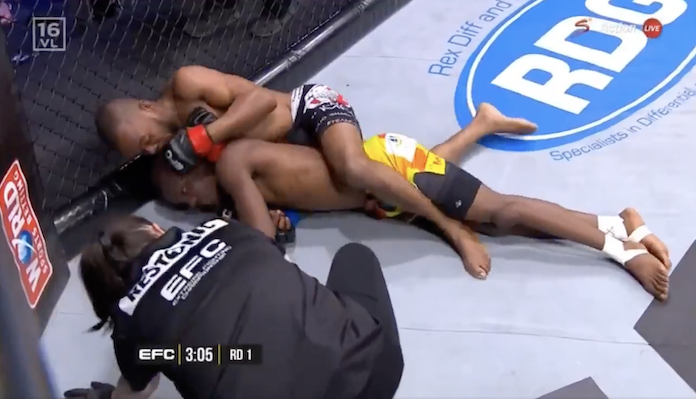 An MMA referee was disturbingly late in stopping a fighter from being choked unconscious at this weekend’s EFC 88 in South Africa.

In a battle of rookie flyweights to open up Saturday’s EFC 88 card in Johannesburg, Julio Plaatjies choked out Teboho Ntene in the first round of their fight with a rear-naked choke submission. However, while it appeared that Ntene had been choked unconscious and Plaatjies told the ref that was the case, the referee refused to stop the fight. The fighter kept the rear-naked choke on for more time than necessary and the fight went completely unconscious. Watch the video of the stoppage below and see for yourself how late it was.

Unfortunately, these types of incidents do happen in MMA, especially on the regional levels. Although EFC is one of the biggest and best shows in Africa, clearly this referee was inexperienced and should not have been in the cage reffing the fight. It was very clear that the fight had been choked unconscious and yet the referee refused to stop the fight until it was far too late. In many ways, the fighter is lucky that nothing more serious happened.

It will be interesting to see if EFC makes any sort of comment on this stoppage or if the referee faces some sort of punishment for their poor judgment. MMA fighters are already risking their lives every time they step into the cage, but the referee is supposed to be there to save them from getting seriously injured. In this case, the referee failed at their job and it will be interesting to see if any sort of sanction comes out of this. Either way, it was a great MMA debut victory for Plaatjies, who scored the submission in his debut.

Do you think this MMA referee should face sanctions for stopping this fight far too late?