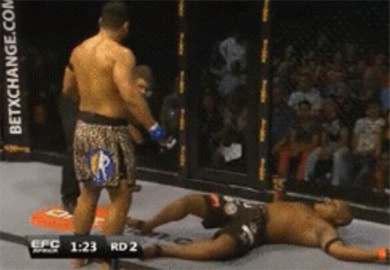 Last night in Johannesburg, South Africa EFC Africa 28 went down. There were three incidents that happened during the fights that caused a bit of controversy. One was a referee’s decision to reset the fighters after a stoppage due to a groin shot. Another was the discovery of extra padding underneath a fighters ankle guard. The most notable one however, took place in the fight between heavyweights Christophe Walravens and Bernardo Mikixi.

The fight ended after Mikixi took a barrage of hammer fist to the back of his head, earning Walravens the TKO victory.

EFC Africa President Cairo Howarth gave his thoughts on the fight and controversy surrounding it via EFCAfrica.com.

“The Walravens vs. Mikixi fight was awesome. Sitting Hexagon side, I had no feeling that the stoppage was handled improperly. It was heat of the moment, Walravens delivering standing hammer fist ground and pound, with Mikixi working for position to defend. Walravens was warned by referee Wiekus Swart to be careful of hitting the back of the head, who was monitoring the fight closely, and I felt he was reading the situation well. Bernardo rolled onto his back, a standard defensive position, and then verbally submitted, at which point Wiekus stopped the fight. In terms of the rules of MMA, I don’t see anything wrong with the stoppage. In fact, the first inkling anyone in the arena had that there may be something wrong was after sensationalism hit the internet – which says a lot about how difficult it is to judge reality on a single camera angle. Bernardo was examined immediately after and had no head injuries to speak of, and at the time was not personally concerned with the blows. We’ve re-watched the fight, and fans need to remember that ‘back of the head’ is a specific area. It’s a narrow strip, running down the centre of the back of the head. It’s not the whole area, from ear to ear. Walravens was angling his shots from the side, making every effort to avoid the danger zone, on a moving target.”

At the promotions last event, EFC 27, Booto Guylain died from brain injuries after losing via TKO. Now he has this fight that featured a fighter taking punch after punch to the back of the head. What are your thoughts on the fight or Howarths’s comments?