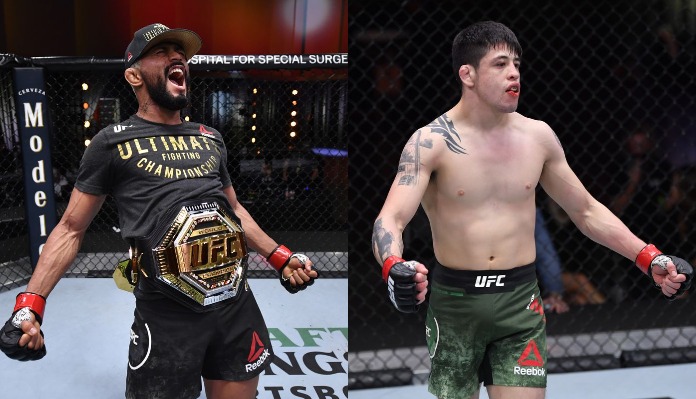 Figueiredo (20-1 MMA) had earned his first career title defense at last month’s UFC 255 event, when he defeated Alex Perez in the very first round with a guillotine choke. That victory marked the Brazilians fifth in a row, and fourth consecutive finish.

Meanwhile, Brandon Moreno (18-5-1 MMA) had also most previously competed at UFC 255, where he earned a first-round TKO victory over Brandon Royval. ‘The Assassin Baby‘ had gone 4-0-1 in his past five fights overall ahead of tonight’s UFC 256 headliner.

Check out how the pros reacted below:

Figueiredo looks like a hyena from lion king.. scary #UFC256

Gutted I’m not fighting for UFC Gold tonight! But it’ll happen soon! Excited to still watch these two studs get after it! #UFC256

I had Moreno winning that 1st Round. Putting up an actual fight! #UFC256

If this fight gets out of this 2nd RD, I think Moreno will take it. #UFC256

This fight is fantastic! #UFC256

Damn that’s an important point. Don’t know that I agree with it

That is a little excessive to take a point without a warning. What do you guys think?

What a fight!
Moreno is a stud but I haven’t seen a champ with such killer instinct in a while!
Great fight!#ufc256

Can’t believe this is a flyweight fight so good!!! @ufc

Draw is def in play now!

Flyweights are a diff breed.

Would you like to see an immediate rematch between Brandon Moreno and Deiveson Figueiredo following tonight’s war this evening in Las Vegas? Share your thoughts in the comments section PENN Nation!