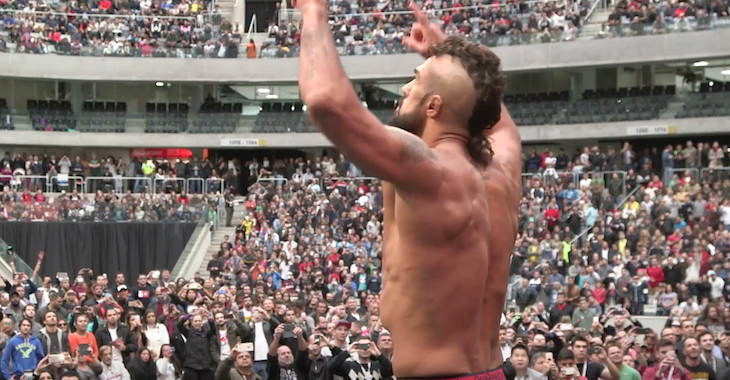 Earlier this afternoon we reported that mixed martial arts legend Vitor “The Phenom” Belfort was hanging up his gloves and retiring from the fight game.

Belfort had taken to Instagram and posted the following photo which included the statement “I decided that I will end this chapter of my life looking at the mirror and recognizing myself.”

Quem não conhecesse os seus erros não é digno de liderar a si mesmo, quanto mais as pessoas que o cercam. Reconheço que não sou perfeito, sou somente HUMANO , um SER HUMANO. O poeta já escreveu : ” – que o amor seja eterno enquanto dure.” Esse é um belíssimo trecho de um poema. Porém eu o considero ingênuo. Com todo carinho e respeito ao poeta, peço permissão para reescrevê-lo da seguinte maneira: ” – QUE O AMOR SEJA ETERNO ENQUANTO SEJA CULTIVADO.” Confesso que preciso cultivar meu desejo pela competição dentro do octógono. Sei que tenho que zelar por aquela chama que sempre ardeu em mim. Tendo conhecimento pleno disso: ” – DECIDI QUE CUSTE O QUE CUSTAR VOU REACENDER MAIS UMA VEZ ESSA CHAMA.” Muito obrigado pelo carinho e apoio. Vou finalizar esse capítulo na minha vida, olhando no espelho e reconhecendo a mim mesmo. Who does not recognize your own mistakes it is not worthy to lead yourself, even less the people around him. I recognize that I am far from perfect, I am only human; a human being. Once a poet in Brazil wrote: ” – may love be eternal while it lasts. It is a beautiful fragment of a poem, but a truly consider it naive. If I may and with all do respect, I would re write it like this: ” – may love be eternal while we nurture it.” I confess that I need to nurture my competitive will inside the Octagon. I must cherish that fire inside of me again. Having recognized that to myself; I DECIDED TO DO WHATEVER IT TAKES TO BURN THAT FLAME AGAIN! Thanks a lot for all the support and advices. But I decided that I will end this chapter of my life looking at the mirror and recognizing myself. @mundoboxing

However, when reached by MMAJunkie, Belfort stated that his Instagram post was not what it seemed and proclaimed the following:

“I’m not retired,” Belfort said emphatically. “I want to fight again soon. I am driven to get back on my feet and honor the nickname I so proudly carry. ‘The Phenom’ is back.”

“I am not pleased with my two last performances and changes are being made,” Belfort said. “I don’t want to end my career the way it is right now. I want to look at the mirror and recognize myself as a the fighter I always have been. I have 20 years in this sport, and I intend to honor that legacy.”

The 39-year-old former UFC champion has suffered back-to-back TKO losses in his past two octagon appearances at the hands of Jacare Souza and most recently Gegard Mousasi.

Prior to those setbacks, Vitor had scored a head kick knockout victory over fellow mixed martial arts legend Dan Henderson at UFC Fight Night 77 in November of 2015. Who would you like to see “The Phenom” fight in his next octagon appearance? Sound off PENN Nation!