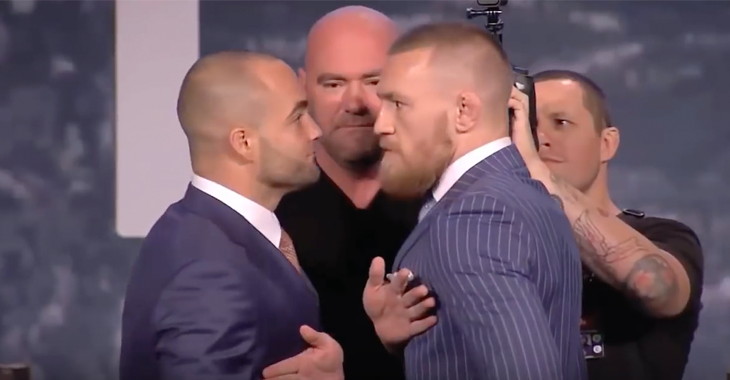 The UFC’s historic first event to take take place in New York will be sure to dazzle, featuring three title fights over a four-hour long PPV, according the UFC.

For MMA fans on the east coast, the main portion of the PPV card will air from 10 pm to 2 am., UFC officials confirmed on Sunday.

UFC 205 will feature an all-star cast of fighters. Check out the six confirmed bouts for the UFC’s first ever event at Madison Square Garden below! With three UFC belts on the line on November 12, there is always the potential for three new champions in one night.

Conor McGregor will look to become the first fighter to hold two belts simultaneously (featherweight and lightweight) in UFC history. While ‘Mystic Mac’ insists he will not relinquish the 145 pound title should be defeat current lightweight champ Eddie Alvarez for the belt, the UFC has very different ideas, with UFC president Dana White telling the media Conor will be stripped of the featherweight belt with a win over Alvarez.

The answer to that dilemma will be solved at UFC 205, where newly-minted 170 pound champ Tyron Woodley will give the fans the fight they had been asking for ever since Woodley won the belt from Robbie Lawler after viciously knocking him out at UFC 201.

Weidman will look to get back on track with a win over surging middleweight contender Yoel Romero following his disappointing performance at UFC 194, where the Long Island native lost the belt to Luke Rockhold.

Donald ‘Cowboy’ Cerrone will look to continue his successful run at 170 pounds when he takes on Kelvin Gastelum, while former champ Miesha Tate takes on Raquel Pennington.

Who do you see being victorious at UFC 205? Sound off, PENN Nation!