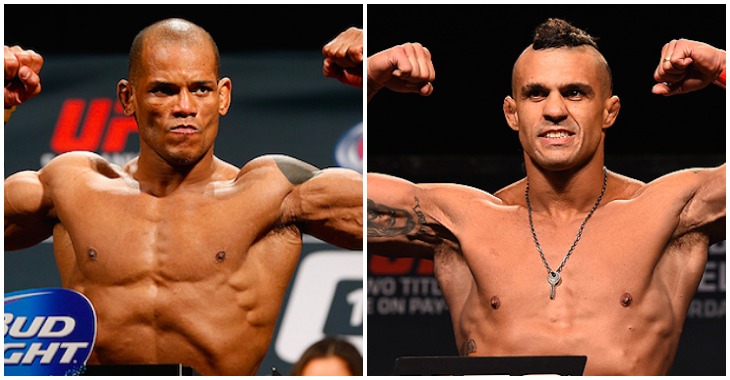 When Vitor Belfort stepped into the Octagon in the main event of UFC Fortaleza last weekend, he was hoping for a revivifying win over a highly-regarded contender in Kelvin Gastelum. What he received instead was his third TKO loss in a row, as he was thumped to an extremely decisive end by first-round Gastelum punches.

In the wake of Belfort’s latest loss, calls for his retirement from competition have grown louder than ever. As he explained in his post-fight interview, however, he has one fight left on his current UFC contract, and he’d like to fulfill that fight, ideally at UFC 212 in Rio de Janeiro, Brazil on June 3.

At the moment, it’s unknown if Belfort will receive his wish and be pencilled in for a retirement fight on this June card. If he does, however, former Bellator champion Hector Lombard, who is also in the midst of an unfortunate skid, is hoping to be his opponent.

Lombard made his call for a bout with Belfort on Twitter on Tuesday evening.

With his loss to Gastelum, Belfort fell onto a three-fight losing streak, with his two next most recent losses coming against top opposition in Gegard Mousasi and Ronaldo “Jacare” Souza. These losses were preceded by a defeat of Dan Henderson, which was in turn preceded by yet another TKO loss to then champ Chris Weidman.

Lombard, meanwhile, is also on a three-fight skid. In his last fight, he gave up a close decision to former UFC welterweight champion Johny Hendricks. Prior to that, he was knocked out by Dan Henderson in his return to the middleweight division, and TKO’d by Neil Magny in his final fight as a welterweight.

Do you like the idea of a Vitor Belfort vs. Hector Lombard fight? Who do you think would come out on top? Sound off, PENN Nation!