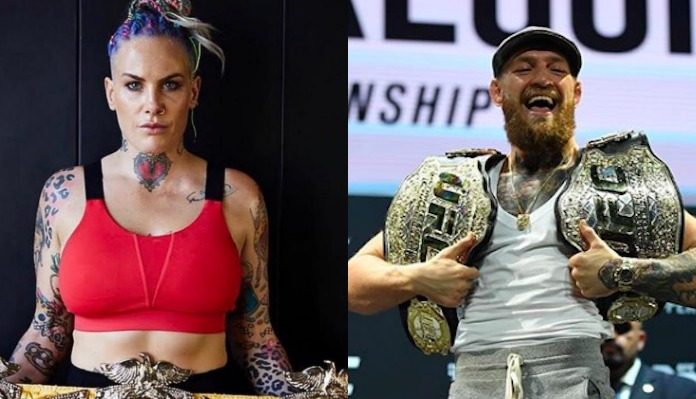 Bec Rawlings is scheduled to make her Bellator debut opposite Ilara Joanne at Bellator 231 on October 25. In preparation for this Bellator debut, Rawlings has been working hard at SBG Ireland, where she’s even gotten some rounds in with former two-division UFC champion Conor McGregor.

Rawlings shared a clip of her work with McGregor on her official Instagram page.

“Light technical session SBG Ireland last night, straight off the plane & into it,” Rawlings wrote of her work with McGregor.

Rawlings formerly competed in the UFC. After a seven-fight run with the promotion, however, she migrated to the sport of bare knuckle boxing, where she was crowned “The Queen of Bare Knuckle” under the BKFC banner.

After this successful bare knuckle run, she inked a deal with Bellator, evidently eager to continue competing in MMA.

Conor McGregor has not fought since October of 2018, when he was defeated by fourth-round submission by UFC lightweight champion Khabib Nurmagomedov. Since then, there’s been much discussion about his potential return to the Octagon.

While McGregor has made no secret of the fact that he’s eager for a rematch with Nurmagomedov, he’s also been linked to fights with UFC lightweight contenders Justin Gaethje and Dustin Poirier.

Gaethje has issued several venomous callouts of McGregor, while Poirier challenged the Irishman to a rematch after failing his own title bid against Nurmagomedov at UFC 241 earlier this month.

At present, it’s not clear if or when McGregor will fight again, although UFC President Dana White is optimistic he’ll fight in early 2020.

Whatever the case, the Irish star is clearly still putting in work in the gym, as evidenced by his recent sparring session with Bec Rawlings.

Do you think Rawlings will benefit from her work with the likes of Conor McGregor at SBG Ireland?