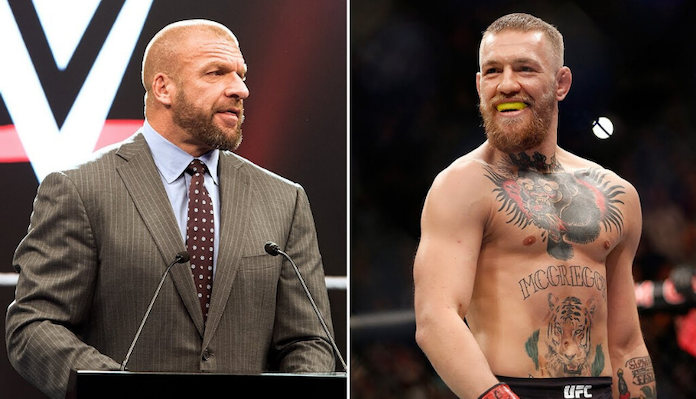 WWE executive Triple H has a message for UFC superstar Conor McGregor, telling the Irishman to “just say when” he wants to move to pro wrestling.

Triple H has long conveyed his interest in bringing McGregor to the world of professional wrestling. Triple H has said that McGregor is someone who is a natural for wrestling due to his charisma, personality, and athleticism. However, McGregor has stayed busy in the world of combat sports with mixed martial arts and boxing, so he hasn’t had the opportunity to go to the WWE. But a move has long been rumored for McGregor to go the WWE route, particularly once he is done with his MMA career, just as Ronda Rousey did.

Taking to his social media, McGregor responded to a tweet from wrestler Finn Balor, who posted an action figure of McGregor and himself with Triple H in between them. That led to McGregor responding to the photo, which in turn led to Triple H sending his tweet. Check out how the conversation went below.

McGregor is currently under contract with the UFC and it’s unlikely that UFC president Dana White would let him go to the WWE in a full-time fashion. He could make the odd appearance here or there, but McGregor seems like someone who the WWE would want to become a face of their company. They would likely want him in a full-time capacity, which would likely only happen once “Notorious” hangs it up for good. Either way, there is definitely some interest here between the WWE and the biggest star in mixed martial arts. Where there is smoke, there’s fire, and there seems to be some mutual interest here.

Do you think Triple H will get a deal done with Conor McGregor one day to compete in the WWE?