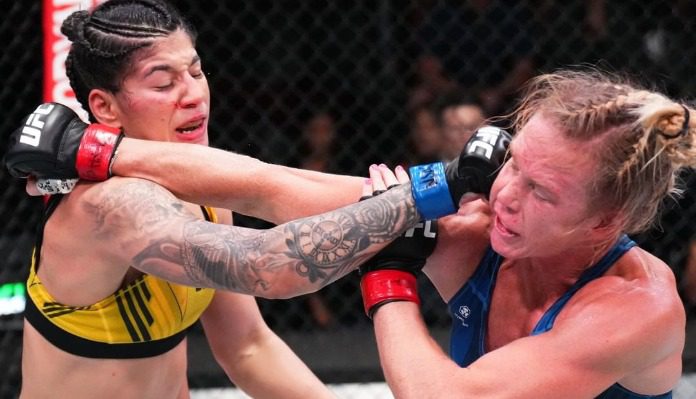 In the main event of UFC Vegas 55, a women’s bantamweight bout headlined the card as Ketlen Vieira took on Holly Holm.

Vieira was coming off her first UFC main event as she beat Miesha Tate last time out. The victory got her back into the win column after losing a decision to Yana Kunitskaya. Holm, meanwhile, had not fought since October of 2020 as she beat Irene Aldana by decision, and before that, she defeated Raquel Pennington.

In the end, it was Vieira who won by split decision to pick up the biggest win of her career. Now, after UFC Vegas 55 here is what I think should be next for both Vieira and Holm.

Ketlen Vieira proved she is a legit title contender at bantamweight on Saturday night at the UFC Apex. Vieira was the underdog against Miesha Tate and got the win and was an even bigger underdog to Holm and she once again pulled off another upset.

With Vieira taking out the number two contender, Vieira will be paying close attention to Julianna Pena vs. Amanda Nunes 2 at UFC 277 on July 30. If Pena gets her hand raised again, Vieira will get the next title shot but if it is Nunes who wins, and should they do a trilogy match, a logical next fight is for the Brazilian to rematch Irene Aldana where the winner gets the next title shot.

Holly Holm had been dealing with injuries that kept her on the sidelines and now she came up short in her return to the Octagon. The former champ is still a big name in the sport and is always a win or two away from getting a title shot.

It didn’t seem like Holm took much damage so she will likely fight at least one more time this year. When she returns, a fight against the winner of Aspen Ladd vs. Sara McMann on August 13 makes sense as the winner of that would then be a win away from a title shot.

What do you think should be next for Ketlen Vieira and Holly Holm after UFC Vegas 55?