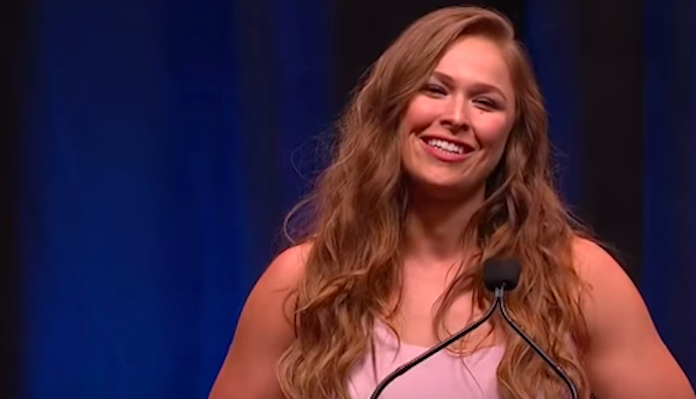 UFC Hall of Famer Ronda Rousey recently got a series of tattoos marking her MMA wins and she posted the video of it on her YouTube channel.

Rousey posted the video of her commemorating her MMA wins with a tattoo listing every single one of her victories with the time of the finish. For example, she finished Cat Zingano in just 14 seconds so the tattoo for that finish reads “14.” The same goes for all of her other MMA victories. All told, Rousey has 12 wins in MMA, and all of them have come by stoppage, with nine coming by way of submission and three coming by way of knockout.

Rousey is not the first MMA fighter to tattoo their wins on their body, as UFC light heavyweight Alexander Gustafsson also famously did the same thing on his arm with spades. However, unlike Gustafsson, who also put in tattoos of his MMA losses with empty spades, Rousey chose to not get her losses to Holly Holm and Amanda Nunes tattooed on her. You can’t blame her for that, of course, as both knockout defeats are obviously something she would like to forget about. For Rousey, it’s all about remembering the wins.

Rousey (12-2) stepped away from MMA in 2017 following the back-to-back losses to Holm and Nunes. At the height of her career between 2013 and 2015, she was arguably the biggest superstar in the sport and she helped put women’s MMA on the map. Before Rousey emerged as a force in Strikeforce, UFC president Dana White famously said that “women will never fight in the UFC.” Of course, Rousey changed that and she changed the history of the sport by becoming a huge superstar who helped bring women’s MMA into the mainstream. She is no longer an active fighter, but you have to respect what she’s done.

What was your favorite memory of UFC Hall of Famer Ronda Rousey?