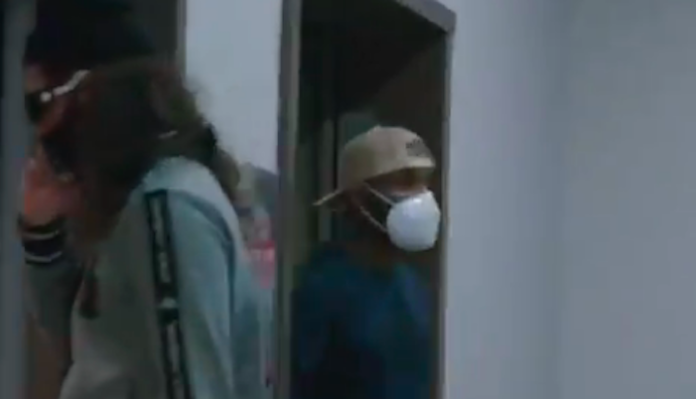 The rivalry between UFC welterweight champ Kamaru Usman and his next challenger Jorge Masvidal will come to a head in the main event of UFC 251 this weekend. Yet the pair very nearly came face-to-face early at the fighter hotel this week.

In the lead-up to the fight, the two fighters haven’t hidden their disdain for each other.

Speaking to ESPN on Monday, Masvidal explained why he doesn’t like the welterweight champion.

Meanwhile, Usman has said that he plans to take Masvidal’s ‘BMF’ belt as well as defend his own UFC welterweight title at UFC 251.

With the war of words ramping up between the two, the cameras will certainly be focused on them all week, and that was evident in the first episode of ‘UFC Embedded‘ on Monday.

During the first episode of Embedded, which follows the stars of the card through Fight Week, cameras captured a close encounter between Masvidal and Usman as they crossed paths by the elevators in the hotel in Abu Dhabi.

While the two fighters did not come in contact with each other, it was as close as it gets. Who knows what might have happened if they’d seen each other.

This will be Masvidal’s first crack at UFC gold, and he is taking it on six days’ notice, after Usman’s originally scheduled challenger Gilbert Burns tested positive for COVID-19 and had to withdraw from the fight.

UFC 251 will be the first of four events on the UFC’s Fight Island, which takes place on Yas Island in Abu Dhabi. The UFC 251 PPV event will feature three title fights: the welterweight title matchup between Usman and Masvidal, a featherweight title rematch between Alexander Volkanovski and former champion Max Holloway, and Petr Yan taking on Jose Aldo for the vacant bantamweight title.

Who do you have in the main event of UFC 251, Jorge Masvidal or Kamaru Usman? Let us know in the comments section down below.