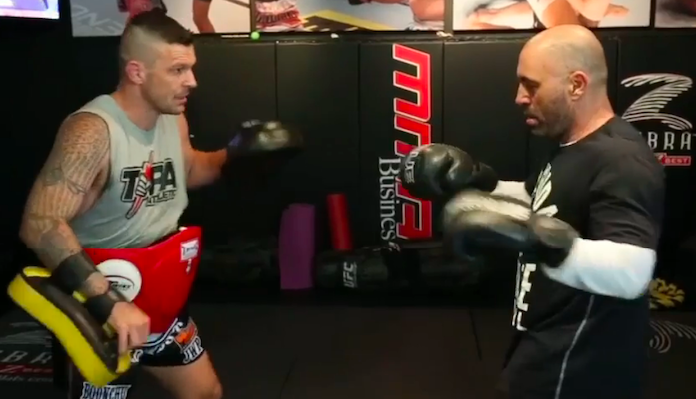 Joe Rogan is known for a lot of things. He’s the UFC’s most recognizable commentator. He’s the host of one of the world’s most popular podcasts. He’s a standup comic. What some fans might not known is that he’s also a lifelong martial artist who is still adding new tools to his arsenal to this day.

Yes, even in his 50s, Rogan still trains regularly and learns from some of the greatest martial artists alive.

One of the UFC’s commentators most notable teachers is Australian Muay Thai legend John Wayne Parr. The pair had a riveting training session together several years ago, and the footage has recently resurfaced on Instagram.

In this footage, Parr, who is one of the most successful farang in Muay Thai history, spent some time reviewing switch kicks and other techniques with the Rogan. See the footage of their training session below (via @doug_rothwell and @johnwayneparr on Instagram).

“Trying to generate power of the left switch kick,” the striking legend wrote of his training session with the UFC commentator. “Living the dream getting to go through the motions with Joe Rogan. This clip we are trying to generate as much power off the switch as possible. I might not have the most beautiful style, but my plan is to make whatever I throw 100% so I don’t waste any of my shots. Thanks to @doug_rothwell for footage.”

Keep scrolling for a few more clips of John Wayne Parr’s training session with Joe Rogan, including some knee technique and the secrets behind his rocket-fuelled jab.

Over the last few years, a number of fighters, such as Paul Felder and Daniel Cormier, have joined him at the commentary desk.