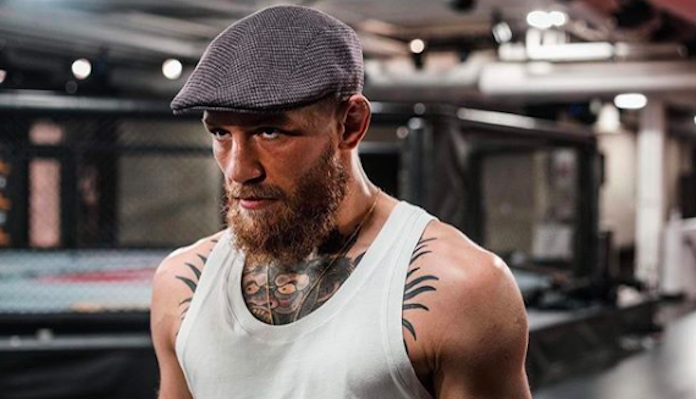 McGregor (22-6 MMA) suffered a nasty leg injury during his trilogy fight with Dustin Poirier last month at UFC 264. Due to fractures in both his tibia and fibula, the Irishman had to undergo surgery.

“I kicked the knee a few times, so I had multiple stress fractures in the shin bone above the ankle.” – Conor McGregor previously said of his injury.

Check out the video clip below, courtesy of ESPN UK, showcasing McGregor talking about his new titanium shin bone whilst cruising around LA on a mobility scooter.

“They said I am going in and getting exactly what I needed. And what I needed was a titanium shin bone. So now I’ve got a titanium rod going down the knee from the knee to me ankle. And the doctor said it is ‘unbreakable’. So once I build back the, well first of all, I need to manage the incision. The cut. You know, make sure it doesn’t get infected. Keep the health on it. Keep building back that way.”

“Then I’ll start playing with the balance and learning how to stand on it again. Then I will learn the balance on a single leg again. The I’ll build the strength. And then I’ve got an unbreakable titanium leg. I’m like, I was talking to my physiotherapist, who was with Arnold Schwarzenegger, and I was saying I am like Arnie in Terminator 2. You know what I mean? This is how I cruise around the Cali streets haha.”

What do you think of Conor McGregor’s news that doctors have provided him with an “unbreakable” titanium shin bone? Share your thoughts in the comment section PENN Nation!