Valentina Shevchenko vs. Alexa Grasso added to UFC 285 in March

The undercard to UFC 285 continues to build, as women’s flyweight champion Valentina Shevchenko has been added.

‘Bullet’ has been out of action since her clash with Taila Santos at UFC 275 last June. In that outing, the Brazilian brought the fight to the champion, who was a heavy favorite. Despite early success from Santos, Shevchenko rallied in the championship rounds.

In Singapore, the women’s flyweight champion retained her title by split decision. Following the event, Santos called for a rematch with Shevchenko but was instead booked against Erin Blanchfield. The champion, meanwhile, has recently expressed interest in a super fight with Weili Zhang or Amanda Nunes.

Despite her hopes of facing a fellow champion, Valentina Shevchenko will not be doing that next. Nonetheless, her next fight has been booked. The women’s flyweight champion has now been added to the undercard of UFC 285 on March 4th against Alexa Grasso. The news was first reported by ESPN Deportes earlier today. 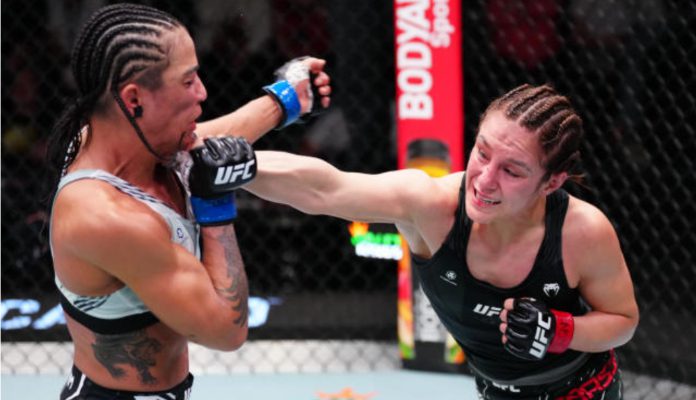 The 29-year-old enters her first title fight riding a four-fight winning streak. Following a loss to Carla Esparza in September 2019, Grasso decided to move up in weight. Based on her recent victories over Viviane Araujo, Joanne Wood, Maycee Barber, and Ji Yeon Kim, the move has worked out.

With the addition of Valentina Shevchenko and Alexa Grasso, UFC 285 now holds three championship fights. The card is slated to be headlined by a vacant heavyweight title fight between Jon Jones and Ciryl Gane. Francis Ngannou was previously stripped of his heavyweight gold this week, setting the stage for the main event.

Along with that, news broke earlier today that Amanda Nunes would be facing Irene Aldana at the event. ‘The Lioness’ has been out of action since reclaiming her women’s bantamweight gold by defeating Julianna Pena by unanimous decision last July.

What do you make of this news? Are you excited about UFC 285? Sound off in the comment section below PENN Nation!

This article appeared first on BJPENN.COM
Previous articleJamahal Hill open to waiting for Jiri Prochazka as his first title defense if he beats Glover Teixeira at UFC 283: “I want that fight”
Next articleFormer flyweight champion Demetrious Johnson casts light on his negotiations with the UFC: “They tried to stiff-arm me”
© Newspaper WordPress Theme by TagDiv