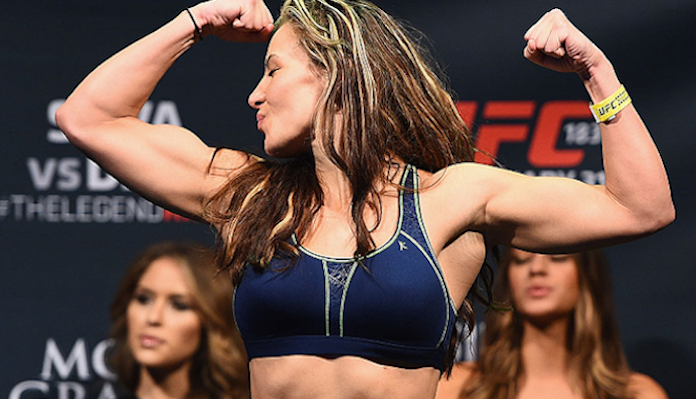 Tate (18-7 MMA) will be returning to the Octagon for the first time since UFC 205 in November of 2016, where she dropped a unanimous decision loss to Raquel Pennington. ‘Cupcake’ earned her most recent victory in March of 2016, when she submitted Holly Holm at UFC 196 to capture the promotions 135lbs title.

Meanwhile, Marion Reneau (9-7-1 MMA) will be looking to snap a four-fight losing skid when she takes to the Octagon this evening. ‘The Belizean Bruiser’ has suffered four straight decision setbacks, her most recent coming to Macy Chiasson in March.

Round one of the UFC Vegas 31 co-main event begins and Miesha Tate presses forward with her jab. Marion Reneau counters with some good low kicks followed by a big right hand. Miesha quickly initiates the clinch. Both women land knees from the position. Tate decides to break free and lands a flurry. Reneau returns fire with a knee up the middle. Miesha Tate dives on a takedown and gets it. She lands some ground and pound before the horn sounds to end round one.

"Welcome back. What's going on?"@Eric_XCMMA welcomed @MieshaTate to the corner after the first round of her return at #UFCVegas31 pic.twitter.com/9cXpn1P9eB

Round two of the UFC Vegas 31 co-main event begins and Marion Reneau comes out swinging bombs. Miesha Tate is able to duck under a right hand and shoot in on a takedown. She would have got it had Reneau not grabbed the fence. Surprising to see the referee only issue a warning there. Another shot from ‘Cupcake’ and it appears that Marion once again grabbed the cage. Nonetheless, Tate secures the takedown and closes out round two in top position.

The third and final round of the UFC Vegas 31 co-headliner begins and Miesha Tate is quickly back in top position. She begins working some solid ground and pound. The referee is taking a good look here. He steps in and calls the fight. Tate wins in her comeback!

Who would you like to see Tate fight next following her TKO victory over Reneau at tonight’s event in Las Vegas? Share your thoughts in the comment section Penn Nation!