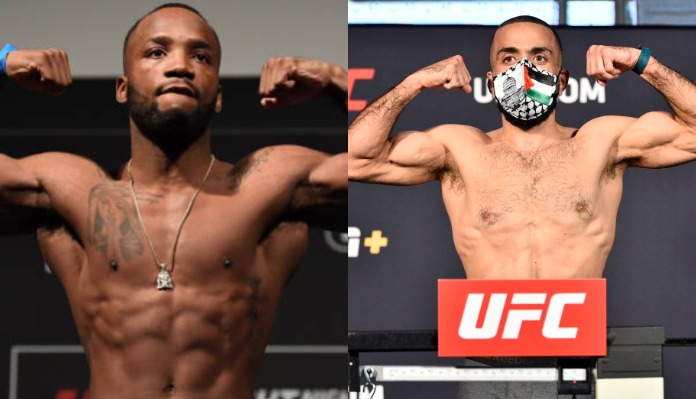 Edwards (18-3 MMA) will be returning to action for the first time since July of 2019, when he defeated Rafael dos Anjos by decision. That victory had marked the Birmingham natives eighth in a row and propelled him to the top of the promotions welterweight rankings.

Belal Muhammad (18-3 MMA), meanwhile, will be looking to spring a significant upset and vault up the welterweight rankings in the direction of the champion with a win over Edwards at UFC Vegas 21. The Chicago native will enter tonight’s headliner sporting a four-fight winning streak, his latest being a unanimous decision victory over Dhiego Lima at UFC 258.

Round one of the UFC Vegas 21 main event begins and Leon Edwards quickly takes the center of the Octagon. He fires off a kick to the body and then the lead leg of Muhammad. Belal replies with a left. Good combinations from both men in the pocket. Leon Edwards with another high kick and this one gets through. Belal Muhammad is rocked. Edwards jumps on him with punches but Muhammad is able to clinch. The fighters separate and then ‘Rocky’ continues to walkdown Belal Muhammad. Good punches and kicks from the Birmingham native. Muhammad forces the clinch and then lands a good elbow on the break. Leon Edwards with a straight left. The horn sounds to end round one.

Round two of the UFC Vegas 21 headliner begins and Leon Edwards accidently pokes Belal Muhammad in the eye while throwing a body kick. Belal drops and is screaming in pain. This does not look good. The doctor tells Herb Dean to wave off the fight.

Who would you like to see the UFC book a rematch between Edwards and Muhammad following tonight’s outcome in Las Vegas? Share your thoughts in the comment section PENN Nation!