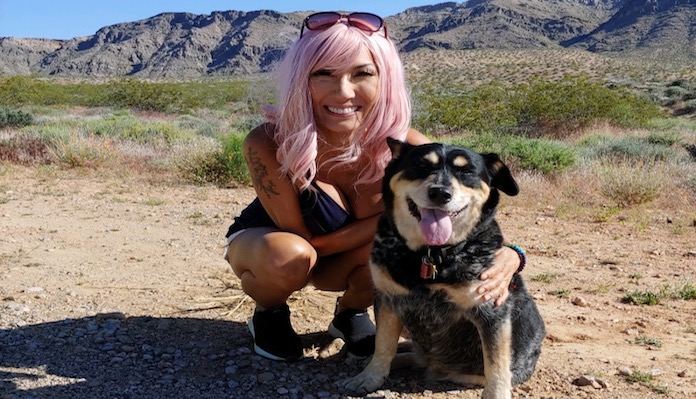 On Wednesday, a GoFundMe was started for Friton by Brittany Churchill, the wife of UFC light heavyweight contender Misha Cirkunov, who battled breast cancer herself last year. Since the GoFundMe was made public, nearly $100,000 has been donated to Friton, including thousands of dollars of donations from MMA fighters.

Jon Jones, the UFC light heavyweight champion, made the most sizeable donation so far, giving a generous $10,000 donation to Friton. It’s an incredible act of kindness from Jones. UFC lightweight Dustin Poirier, the winner of the first-ever UFC Forrest Griffin Community Award, also stepped up huge, donating $5000 to the fund.

Tyron Woodley donated $2000, Chito Vera donated $1200, and Neil Magny, Paul Felder,  Rose Namajunas, Gilbert Burns, Chael Sonnen, and Jon Anik each donated $1000.  Even fighters who are no longer in the UFC such as Zak Ottow and Lorenz Larkin also donated $1000 each, as did former UFC color commentator Mike Goldberg. The acts of generosity are incredible and show once again that the MMA community takes care of their own.

As well, generous donations were also made by fighters such as Michael Bisping, Joe Lauzon, Josh Emmett, Benson Henderson, Valentina Shevchenko, Carla Esparza, Chas Skelly, Al Iaquinta, Jimmie Rivera Lando Vannata, Felice Herrig, Lauren Murphy, Angela Hill, and Chris Weidman, plus many more. None of these fighters donated money for attention, they did it to help their friend out, but they all deserve to be recognized.

A number of mixed martial arts coaches have also stepped up, with Duke Roufus, Sayif Saud, and Mike Dolce among those making hearty donations. MMA journalists and media have also taken to the cause, and of course, thousands of fans in the mixed martial arts community have also stepped up to make donations, as well. It’s clear that Suzy Friton is very loved in the MMA community and although she is currently in a tough battle with breast cancer, the love of the community is there for her as she fights.

You can read additional information about the Suzy Friton GoFundMe below.

We are all fighters!! 💯Please help me fight this fight Hi guys , I made this video because I need your help. I have a battle in front of me – I will win – there is NO OTHER OPTION ! #fuckcancer So update – my cancer has come back- and its decided to be stage four in multiple places throughout my body – however … I am #positive and certain I can beat this we are fighting this naturally and with #Homopathic base. I hope I have your blessing and love thru this fight I’m in! I know everyone has been going thru much struggle with covid and just life in general- so I #appreciate you all very much and any help or share you can give Im grateful! . ♥️♥️♥️