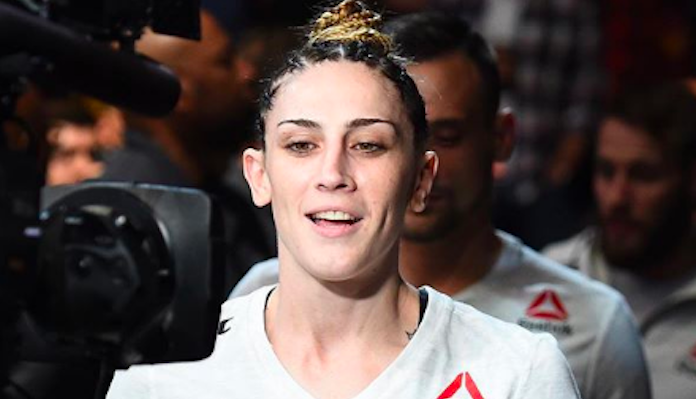 Australian featherweight, Megan Anderson reveals her incredible physique during a lingerie shoot posted to her Instagram:

The 29-year old last fought Zarah Fairn dos Santos at UFC 243 on October 5th. She used her submission expertise to execute a triangle choke on her opponent and achieve a first round victory. That win moved Megan back into the win column, as she had previously suffered a loss to the undefeated (at the time) featherweight fighter, Felicia Spencer.

When Anderson is not fighting in the Octagon, she is reporting outside of it. The former Invicta FC champion is a correspondent for the fighting organization.

The brunette bombshell also showcased her impressive collection of tattoos on her Instagram page, including a female warrior tattoo on her leg. Despite coming across as a strong and confident woman, the athlete has her own mental health struggles. On Instagram she posted:

“I was a little nervous, but I’m so glad [photographer Bo Flores] pushed me out of my comfort zone!!

In an interview with MMA Junkie at UFC 243, Megan Anderson opened up about her troubling childhood:

“I feel like I had a lot of issues from my childhood that I’ve never dealt with, and I’ve always been open about being bullied, and I’ve had some – a lot with my home life,” Anderson said. “My dad was an alcoholic. I think it’s been like six years now, so I’m so proud of him he’s been sober, and that’s amazing.

“But I’ve had a lot of demons from my childhood growing up that I never have dealt with, and I kind of used that to fuel me throughout my early MMA career,” Anderson continued. “But I kind of got to a point where I’m kind of at peace with – I never had dealt those issues, and it kind of made everything go to (expletive) for lack of a better word.”