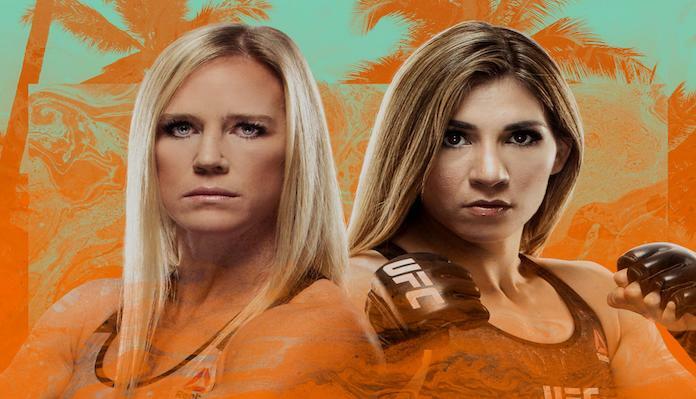 The Octagon remains on Fight Island for tonight’s UFC on ESPN event, an eleven-bout fight card headlined by Holly Holm vs. Irene Aldana.

The UFC’s former women’s bantamweight champion, Holm (13-5 MMA), will enter tonight’s contest looking to build off the momentum from her unanimous decision victory over Raquel Pennington in January.

Prior to defeating ‘Rocky’ in Las Vegas, Holly Holm was coming off a knockout loss to reigning women’s champ-champ Amanda Nunes at UFC 239.

Meanwhile, Irene Aldana (12-5 MMA) will enter UFC Fight Island 4 on a two-fight win streak, her latest being a knockout victory over Ketlen Vieira this past December. The Mexican standout has gone 5-1 over her past six Octagon appearance ahead of tonight’s contest with Holm.

De Castro (6-1 MMA) will enter tonight’s bout looking to rebound after suffering a unanimous decision loss to Greg Hardy at UFC 249. Prior his setback to the former NFL standout, the native of Cape Verde was coming off a first round knockout win over Justin Tafa at UFC 243.

As for Carlos Felipe (8-1 MMA), the Brazilian will also be looking to return to the win column at tonight’s event, this after suffering a unanimous decision setback to Sergey Spivak in his promotional debut.

If that wasn’t enough to get you interested, tonight’s UFC Fight Island 4 event also features the return of ‘The Natural Born Killer’ Carlos Condit.

Kyler Phillips vs. Cameron Else – Phillips def. Else via TKO at :44 of Round 2

Luigi Vendramini vs. Jessin Ayari – Vendramini def. Ayari via TKO at 1:12 of Round 1

RELENTLESS! What a start to #UFCFightIsland4 as @VendraminiLuigi gets the quick finish!!

Who are you picking to win tonight’s UFC Fight Island 4 main event between Holly Holm and Irene Aldana? Share your predictions in the comments section PENN Nation!

This article first appeared on BJPENN.com on October 3, 2020