Despite going just 2-5 over his past seven fights former UFC middleweight title holder Chris Weidman is doing his best to score a title fight with reigning division champ Israel Adesanya.

Ever since ‘Stylebender’ handed Paulo Costa the first loss of his career at UFC 253, Weidman has been doing his best to draw the attention of the middleweight champ.

‘The All American’ insinuated that he would be able to utilize his strong wrestling skills to “ragdoll” Adesanya in a potential fight.

More recently the former UFC middleweight kingpin in Chris Weidman took to Twitter where he dubbed a fight with Israel Adesanya as being “easy money”.

“Hey, I just realized I have 2 common opponents with Adesanya…Gastelum who I finished. Then Silva who I finished twice. Israel Adesanya squeaked by decisions on both of those guys.. Adesanya is just another Silva without the black belt in Jitsu. Easy Money.”

Those comments clearly caught the attention of Israel Adesanya who responded with the following remarks.

“Chris Weidman… get some wins first please. I already have you figured out. I’ve sized you up a few times. Watched you hit and miss I know how to fuck up your single and double leg attacks I’m 10 steps ahead like I said. I knew I would use this clip one day to prove that I knew!” 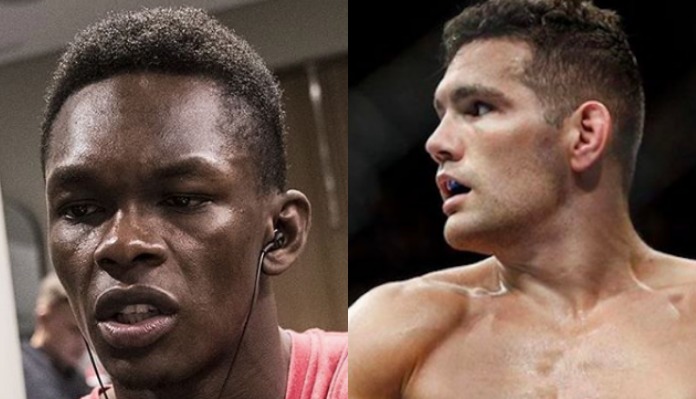 Weidman (15-5 MMA) is coming off a unanimous decision victory over Omari Akhmedov in his most recent Octagon appearance, but had previously lost five of his past six fights.

Despite his recent struggles Chris doubled down on his callout of Adesanya earlier tonight.

You were very nice to my face that night to be talking like that on your phone. Two faced as hell! I would grab your weak ass and crush you! YOU remember our interactions that night and YOU know this is a problem you don’t want https://t.co/oBy2YE5iF0

“You were very nice to my face that night to be talking like that on your phone. Two faced as hell! I would grab your weak ass and crush you! YOU remember our interactions that night and YOU know this is a problem you don’t want.”

Meanwhile, following his win over Costa at UFC 253 it appears that Jon Jones could be next for Israel Adesanya. UFC President recently dubbed the bout as the “fight to make“.

This article first appeared on BJPENN.com on October 2, 2020