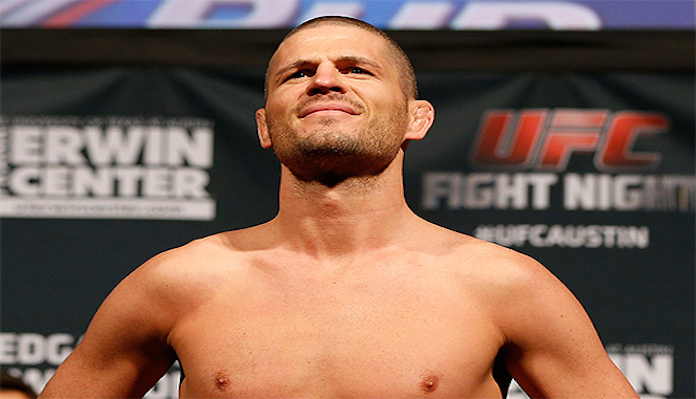 The UFC has made its latest round of roster cuts, releasing several fighters from the roster including veteran lightweight Matt Wiman.

UFC president Dana White has promised the world’s leading MMA promotion will be making 60 cuts to its active fighter roster. The promotion last month released former middleweight champion Anderson Silva, before recently releasing top-five ranked middleweight Yoel Romero in a shocking move. The cuts will continue to keep on coming as the UFC is looking to make room on its roster for Contender Series alum, new fighters from The Ultimate Fighter, and free-agent signings.

On Tuesday, the latest round of roster cuts was revealed. According to Combate, the UFC has released Wiman, plus light heavyweights Gadzhimurad Antigulov and Saparbek Safarov, bantamweight Cole Smith, and featherweight Eduardo Garagorri. None of these fighters are as big of a name as Silva and Romero, but it’s clear from releasing these five fighters that the UFC is fully locked into a roster-cutting mindset, and there are many more fighters on the current roster who could be cut.

Of these five fighters who were released, the most notable is of course Wiman. Making his UFC debut way back at UFC 60 in 2006, when he suffered a flying knee KO loss to Spencer Fisher, Wiman fought in the promotion exclusively since then, racking up a 10-8 overall record in 19 fights in the Octagon. He won five “Fight of the Night” bonuses during his career and another for “Submission of the Night.” Unfortunately, after losing by slam KO to Jordan Leavitt, Wiman has been cut.

Also released were Gadzhirmuad Antigulov, who had a 2-4 UFC record; Saparbek Safarov, who had a 1-3 UFC record; Cole Smith, who went 1-2; and Eduardo Garagorri, who went 1-2 as well. This latest round of roster cuts is another reminder for all the fighters on the roster who are coming off of a loss that they could be at risk of being released as the promotion looks to pare down its roster as 2020 ends.

UPDATE: Matt Wiman got in touch with BJPenn.com and confirmed he fought out his contract with the UFC. Hey guys to be clear… I wasn’t cut … I wasn’t released… this was my last fight on my latest contract and we mutually decided I can fight it out and go from there… I decided to retire shortly after the bout… it was an easy, relieving decision that was harmonious with the promotions stance… I did everything I set out to do with the sport and more… super pleased and grateful.

What do you make of the latest round of UFC roster cuts?