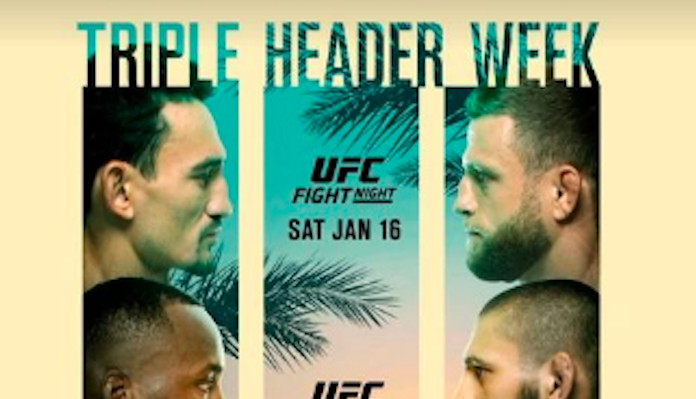 UFC President Dana White has confirmed that his promotion will return to Fight Island—Yas Island in Abu Dhabi—in January of the New Year.

While this is not exactly new information, the UFC had not made the plan official until Tuesday, when White shared a promotional poster for the first three events back on Fight Island, which will all go down in the same week.

The UFC’s return to Abu Dhabi will begin with the UFC Fight Island 7 card. That event will be topped by a featherweight fight between former champ Max Holloway and rising contender Calvin Kattar, and feature appearances from fighters like Sara McMann, Julianna Pena, Santiago Ponzinibbio and Li Jingliang.

Next up will the UFC Fight Island 8 card, which will be topped by a welterweight fight between No. 3-ranked contender Leon Edwards, and rising prospect Khamzat Chimaev. The card will also feature the UFC debut of Francisco Figueiredo, the brother of UFC flyweight champion Deiveson Figueiredo.

Next up on Fight Island is UFC 257, a pay-per-view blockbuster that will be topped by a lightweight rematch between former two-division champ Conor McGregor and former interim champ Dustin Poirier.

Which of the fights announced for Fight Island are you most excited for?