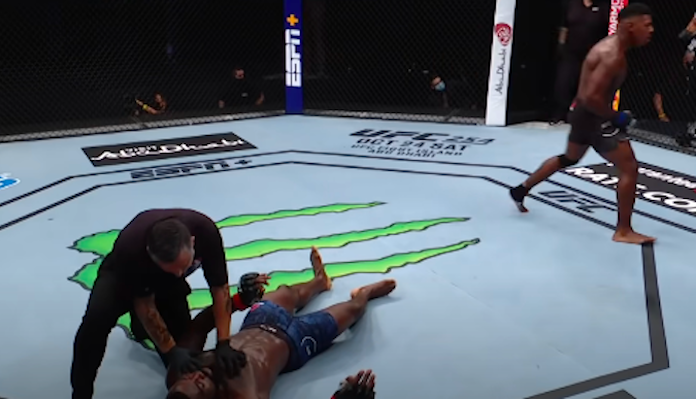 With 2020 winding down, the UFC has released a video of the year’s best knockouts, and the promotion is asking fans to pick their favorites.

See the video below.

Despite the many challenges we’ve all dealt with this year, the UFC managed to promote a long list of exciting events, and several of those events featured truly unforgettable knockouts.

The UFC knockouts included in the video above are:

Fans interested in voting for the 2020 Knockout of the Year can do so on the official UFC website or on the promotion’s social media channels.

While this year certainly didn’t go the way anybody planned. the prevalence of highlight reel KOs in the Octagon is proof that the year certainly had some upside from the UFC. In fact, according to UFC President Dana White, this was one of the promotion’s best years to date.

“During the pandemic, we were up 30 percent on ESPN,” White told TSN’s Aaron Bronsteter, looking back on some of the successes the UFC enjoyed in 2020. “Then as soon as it starts to average out, we’re up 18 to 20 percent this year.

“Our social media growth was massive this year,” the UFC boss. “We surpassed 10 million followers on YouTube, earning us Diamond Play status—second only to the NBA among sports organizations worldwide. Our Instagram growth in the US went up 38.17 percent—we’re second only to the NBA again. Second most views on Instagram compared to all other US-based sports—number two to the NBA—and the Joaquin Buckley [viral knockout] was massive. It broke all kinds of records.

“We broke every record we had except for live gate,” White continued. “I mean, consumer products is up 166 percent this year, and the list just goes on and on. We killed it this year. It was an amazing year for us.”

What’s your favorite UFC knockout from 2020?