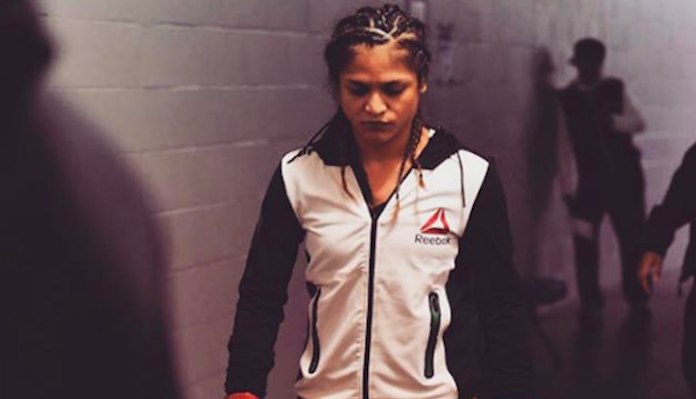 Calvillo missed weight for the event (118lbs), and thus will surrender 20% of her fight purse to opponent Poliana Botelho.

Round one of this UFC Argentina main card bout begins and Calvillo fires off a low kick. Botelho returns fire with one of her own. Both women are happy to trade low kicks early. Cynthia presses forward with a combination. Poliana circles off the cage and attempts a high kick. Cynthia blocks that and steps forward with a jab. Calvillo with a right hand over the top. She follows that up with a low kick. Botelho misses with a body kick. Calvillo connects with another low kick followed by a jab. Just over two minutes remain in the opening round of this UFC Argentina contest. Calvillo leaps in with a beautiful jab. She shoots in and takes Poliana to the floor. Calvillo moves immediately to side control and begins working some elbows. Botelho is in a bad position here. Calvillo is looking to secure an arm. Botelho avoids by Cynthia Calvillo begins landing some short punches and elbows. She is pressing her knee into the chest of Poliana. She begins raining down left hands. Botelho attempts to scramble but gives up her back in the process. Cynthia Calvillo locks in a rear-naked choke and this fight is all over!

"Cynthia Calvillo, welcome back." @cyn_calvillo gets the submission win in round one. pic.twitter.com/2FSn6jSnrZ