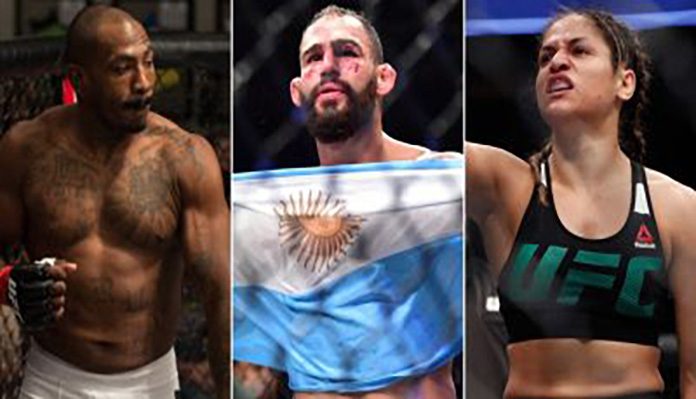 UFC Fight Night Argentina is in the books. Last night the Luna Park arena in Buenos Aires was rocking for the entire night of fights.

The Argentinian faithfull showed up in a big way and it was evident from the very first fight of the night that they were ready to back their countryman.

There were 12 fights in total on last night’s UFC Argentina card. Local favorite Santiago Ponzinibbio proved he was deserving of top billing while others like Guido Cannetti failed to capitalize on the biggest stage of his career.

All and all, however, UFC Argentina exceeded relatively low expectations in this writers’ opinion. But just who were the biggest winners and losers coming out of this weekend’s fights?

As mentioned earlier, Ponzinibbio brought the house down as he picked apart Neil Magny for the better part of four rounds in last nights main event.

Ponzinibbio has now won seven straight at 170 pounds. That is the second longest active winning streak in the welterweight division. Kamaru Usman holds the top spot with eight straight wins. Though Usman is currently booked with Rafael dos Anjos at The Ultimate Fighter 28 Finale, the winner could be looking at a No. 1 contender bout with Ponzinibbio.

With this win, Walker extends his winning streak to seven straight. Walker stands a towering 6’5″ and has a ridiculous 81″ reach. Physical measurements that the light heavyweight division hasn’t seen since dare I say, Jon Jones.

Cynthia Calvillo ran through Poliana Botelho in her return to the Octagon.

Calvillo looked impressive en route to her submission over Botelho. The only thing that makes this win a little less sweet is the fact that Calvillo missed weight by two pounds. She nearly fell off the scale when weighing in, leading many people to wonder if she should even be competing. In this writers opinion, however, her performance should out-shadow her weight miss.

Khalil Rountree entered Saturday night on a three-fight winning streak. This loss is a big setback for Rountree, who some prognosticators had pegged as a serious contender. At 28 years old, “The War Horse” still has a long fighting career ahead of him. Albeit, this loss is a bump in the road for Rountree, perhaps he can turn this negative into a positive.

Guido Cannetti was the only Argentian fighter out of the three that did not get their hand raised Saturday night in Buenos Aires. Quite the dubious distinction for Cannetti who really had a terrific first round against Marlon Vera.

However, “Chito” Vera had other ideas on how this fight would end. This could’ve been the ideal way for Cannetti to call it a career. Walk off into the sunset on the heels of UFC Argentina. At 38 years old, who knows where Guido goes from here.

Poliana Botelho was a slight favorite over Cythina Calvillo heading into UFC Argentina, and for good reason. The 29-year-old had won five straight and only needed 33 seconds to defeat her last opponent.

The fact that Botelho lost is not that surprising, it’s the manner in which she was beaten. Calvillo ran straight through Botelho on her way to scoring the first round submission by rear-naked-choke. It will be interesting to see where the matchmakers decide to go next for Botelho.