Adesanya (23-1 MMA) and Pereira (6-1 MMA) of course have a history, with ‘Poatan’ having defeated ‘Stylebender’ on two occasions in the Glory kickboxing ring.

Israel Adesanya will be returning to action for the first time since scoring a unanimous decision victory over Jared Cannonier at July’s UFC 276 event. Izzy will be looking to earn his sixth career middleweight title defense this evening at Madison Square Garden.

Meanwhile, Alex Pereira also last competed at UFC 276, where he earned a first-round knockout victory over Sean Strickland. The Brazilian kickboxing specialist has gone a perfect 3-0 since joining the UFC ranks in 2021. 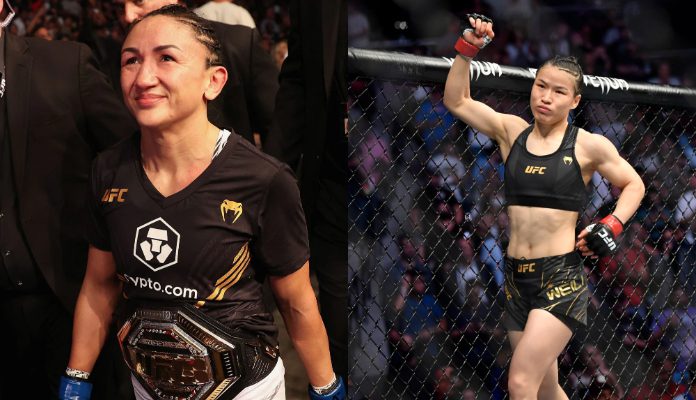 Esparza (19-6 MMA) recaptured the 115lbs title at May’s UFC 274 event, scoring a split-decision win over Rose Namajunas. That victory served as ‘The Cookie Monster’s’ sixth in a row, a streak which has seen her defeat the likes of Yan Xiaonan, Marina Rodriguez, Michelle Waterson and Alexa Grasso.

Meanwhile, Weili Zhang (22-3 MMA) was most recently seen in action at June’s UFC 275 event, where she scored a nasty knockout victory over Joanna Jędrzejczyk. That win snapped a two-fight losing skid for the Chinese standout, as Zhang had previously suffered back-to-back losses to Rose Namajunas.

If that wasn’t enough to get you interested, tonight’s UFC 281 also features a key lightweight fight between perennial division contenders Dustin Poirier and Michael Chandler.

Poirier (28-7 MMA) will be returning to action for the first time since suffering a submission loss to Charles Oliveira in a fight for the promotions vacant lightweight title at UFC 269. Prior to that setback, ‘The Diamond’ was riding a three-fight winning streak, which included two TKO victories over Conor McGregor.

As for Michael Chandler (23-7 MMA), ‘Iron’ was last seen in action at May’s 274 event, where he scored a highlight reel knockout of Tony Ferguson (see that here). Prior to that victory, the former Bellator champion was coming off losses to Justin Gaethje and Charles Oliveira respectively.

Israel Adesanya vs. Alex Pereira – Pereira def. Adesanya via TKO in Round 5

Carla Esparza vs. Zhang Weili – Zhang def. Esparza via submission in Round 2

Frankie Edgar vs. Chris Gutierrez – Edgar def. Gutierrez via KO in Round 1

Erin Blanchfield vs. Molly McCann – Blanchfield def. McCann via submission (kimura) at 3:37 of Round 1

Matt Frevola vs. Ottman Azaitar – Frevola def. Azaitar via KO at 2:30 of Round 1

Michael Trizano vs. Seungwoo Choi – Trizano def. Choi via TKO at 4:51 of Round 1

Trizano gets the finish! What a scrap 🔥 #UFC281 https://t.co/vimMeErBzu

Who are you picking to win tonight’s UFC 281 fights? Share your predictions in the comment section PENN Nation!