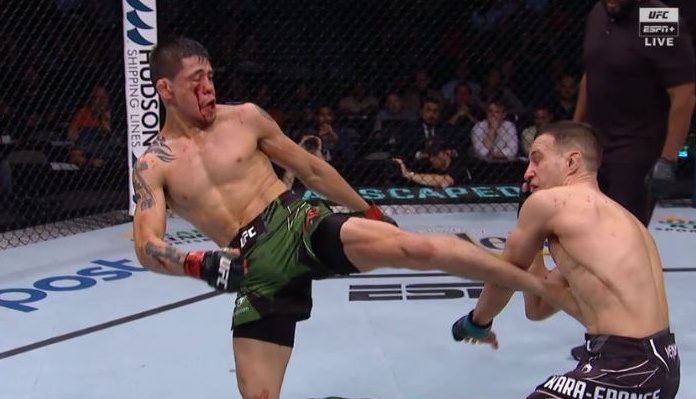 Brandon Moreno won the top Fan Bonus of the Night award via Crypto.com thanks to his performance at UFC 277.

Last Saturday night at UFC 277, we saw a whole host of strong performances in Texas as the Lone Star State helped put on one of the most entertaining UFC pay-per-views of the year so far.

Brandon Moreno was at the forefront of that as he landed a beautiful liver kick to finish Kai Kara-France and claim the interim UFC flyweight championship.

As it turns out, that was enough to earn him the top Crypto.com bonus in the eyes of the fans – with Amanda Nunes and Derrick Lewis, somewhat strangely, also getting in on the action.

A lot of fans don’t put a whole lot of stock into these bonuses but either way, it’s nice to see Moreno, Nunes and Lewis all get a bit more recognition.

Nunes was able to shine in the main event as she put on an absolute clinic to defeat Julianna Pena via unanimous decision and regain the UFC bantamweight championship. On the flip side, though, Derrick Lewis actually came out on the losing end in his showdown with Sergei Pavlovich as he fell to a controversial TKO defeat.

The fact that the stoppage was deemed to be early from the referee is likely one of the reasons why Lewis found himself in the top three as he goes in search of a return to winning ways in his next outing.

Do you think Brandon Moreno deserved to receive the top bonus honour from the fans? Let us know your thoughts on the bonuses down in the comments, BJPENN Nation!